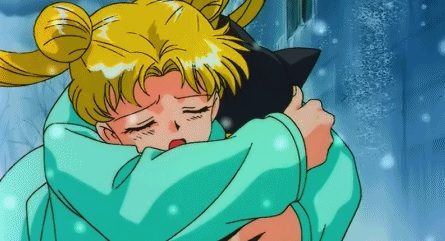 Asking a Sailor Moon fan which of the three movies is their favorite is akin to walking into a crowded room of strangers and asking them all what they think about the latest political hot-button issue: it’s not going to end well.

While I personally prefer the Sailor Moon R movie, all three of the movies are definitely worth watching, and I can understand why they have their fans.

Today we’re going to try to get a little more insight behind the story of the Sailor Moon S movie by looking at some of the director’s notes provided with the Laser Disc release of the Sailor Moon S movie. If anyone can help win my heart over with a deeper interpretation of the movie — putting aside for a second Naoko’s amazing manga version on which it’s based — I’d say the director is probably out best bet! 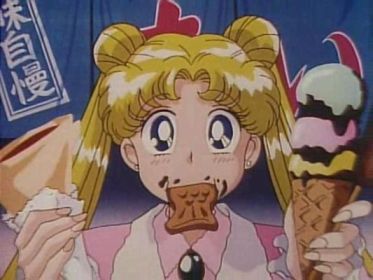 Usagi doing what she does best… eating!

Though not quite as well known as his Sailor Moon R counterpart Kunihiko Ikuhara, Sailor Moon S movie director Hiroki Shibata has an impressive number of animated tv series and movie credits to his name.1 He was also heavily involved in the direction of the Sailor Moon S and Sailor Stars anime seasons, so there really isn’t much room to criticize him for “not getting” the series.

That being said, many fans (rightfully) point out that this movie has a different feel to it than the rest, and not all of that can be explained away by the fact that Ms. Takeuchi was heavily involved in the production. In fact, the places where the movie is often criticized as “going wrong” are the times when it deviates from Ms. Takeuchi’s story.

In the interest of fairness, I think we should give Director Shibata a chance to tell his side of the story, and provide his insights behind some of the movie’s pivotal scenes.

The Sailor Girls out on the town

Opening (Moonlight Densetsu) — a day off with Usagi & friends

Director Shibata comments that his goal for the movie’s opening scene was to show Usagi and her friends living out their normal, day-to-day lives. Taking into consideration that the majority of the audience were likely 3-10 year old girls, he opted to add a lot of comedy to the opening scenes to draw in the viewers. As an interesting aside, he also mentions that he had a daughter in first grade (roughly 6-7 years old) at the time, and she loved this part of the movie.

Read also:  What Joke Did the Anime Staff Sneak in About Director Ikuhara?

As for the location where this takes place, he remarks that it’s an amalgamation of Shinjuku, Shibuya, and Harajuku. Personally, judging by all the stores in the background, I’d argue it’s pretty much Shinjuku… but that’s another article for another time.

The scene surrounding Luna and Kakeru’s first meeting, where she collapses in the street and is nearly hit by a car, ties into a similar scene later in the movie when Kakeru himself collapses. Perhaps I’m just dense — I probably am — but I never actually noticed that. Neat! 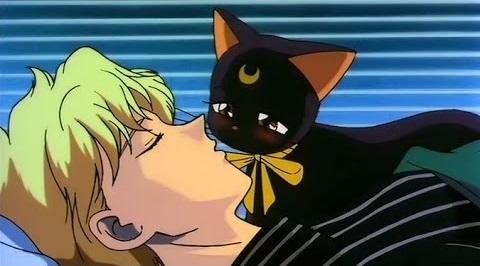 I always found this Luna scene a taaaaad creepy

Back at Kakeru’s observatory/home, Director Shibata asked the sound effect artists to add a faint sound of waves to this scene, as he felt that that the sound perfectly captured the loneliness and quietness of living in an observatory.

Worried that the audience might be getting bored of watching the story of some new guy and Himeko unfold, Director Shibata added in the scene of Usagi and friends worried about Luna not coming back in order to keep the audience engaged. He also threw in a scene of Rei and Usagi exaggeratedly arguing with each other — an anime favorite — to add a comedic tone and keep the story light.

In order to convey a sense of ice, snow, and cold for Princess Snow Kaguya and her Snow Dancers, Director Shibata notes that they used blue carbon when transferring over their outlines onto the cels for coloring. Incidentally, usually black carbon is used (hence the black character outlines you usually see).

Director Shibata mentions here that he thinks of the transformation animation and music as similar to a child’s beloved picture book: no matter how many times they see it, it still elicits feelings of fun and excitement, and the animation never gets old.

I would be inclined to agree… until he notes that this was part of his reasoning behind why he used the transformations and attacks basically as-is from the tv series, without much in the way of any extras for the movie. All that he really changed was increasing the tempo of the Sailor Team’s transformations and using the long version of Sailor ChibiMoon’s transformation.

I can see where he’s coming from in terms of not wasting money on something the viewers would already be satisfied with anyway, but I do think I like Director Ikuhara’s all-out approach in Sailor Moon R better.

The Santa Mask (Tuxedo Claus?) scene was apparently added in at Producer Iriya Azuma’s direction. Since most of the audience would be watching the movie in theaters on or near its December 1995 release, he wanted to have a scene that had something to do with Christmas or New Years. And thus Tuxedo Claus was born.

Other ideas pitched out by the production staff were to have Tuxedo Mask float down holding a kite — a popular Japanese new years activity2 — with skis attached to his feet, or to show up playing hanetsuki,3 a traditional Japanese game akin to badminton.

I don’t know about you, but I think I’m happy to stick with Santa Mask. 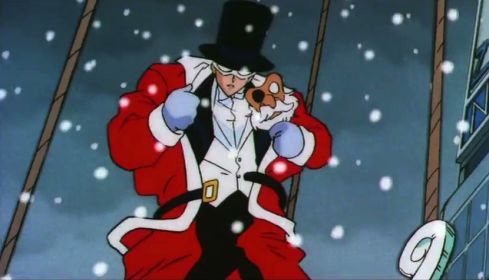 Tuxedo Claus is comin’ to town~!

Unfortunately, this is running a bit long and we’ve still got quite a bit of a ways to go to get through all of the director’s commentary (note 9 of 22),4 so I think I’ll have to cut it off here for now and save the rest for next time. I really do love getting this extra insights behind the movies, though, since they give me further incentive to watch the movies again and see if I pick up anything new.

As I mentioned above, Sailor Moon R happens to be my favorite of all the movies, but I’m curious to know what everyone else thinks. Even among me and my siblings, we’re all across the board on this subject, so I’d be interested in hearing how other people feel about the movies!

9 thoughts on “What Were Director Shibata’s Inspirations for the Sailor Moon S Movie (Part 1)?”