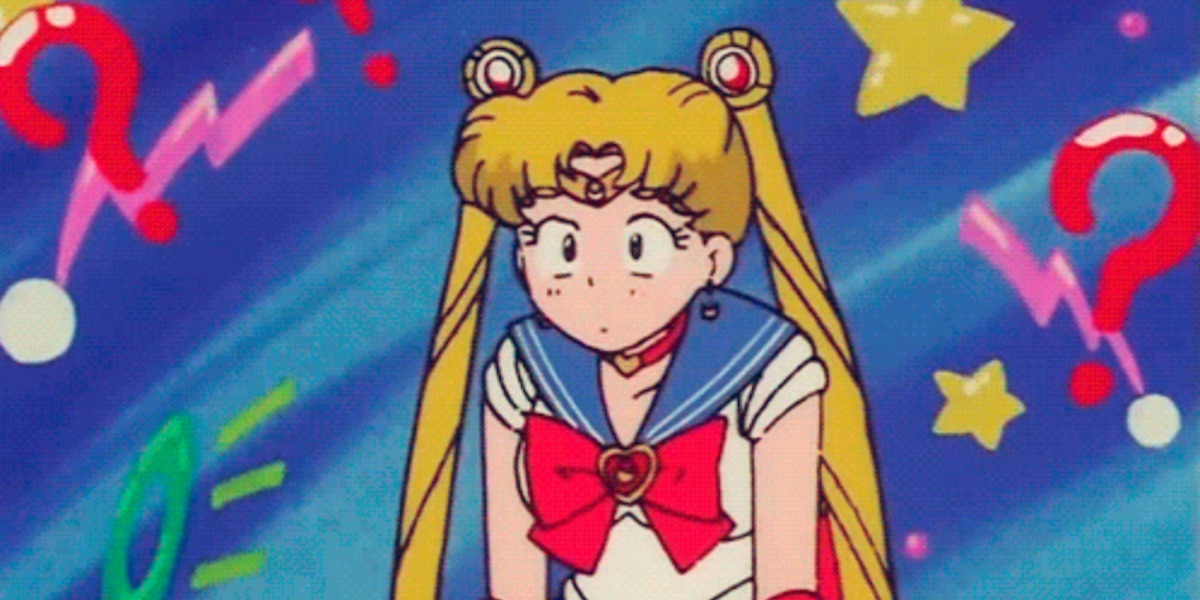 Pretty much none of the timeline makes sense… but we’ll try anyway!

It’s a very rare occasion that I can make any definitive statements about Sailor Moon that doesn’t require a bunch of asterisks, footnotes, or hedge words just to cover all my bases. But I can say with absolute conviction that the Sailor Moon timeline is… well, screwy.

This is only to be expected, of course, when you consider that more and more story elements were added to both the past and the future as the series continued, requiring all sorts of course corrections to answer some questions, all the while leaving more in their place.

Today we’re going to take a bird’s-eye view of the Sailor Moon timeline and see if we can make some sense out of this tangled ball of yarn, and figure out where some of the (as of yet) unanswerable questions lie. I hope you’ve had your morning coffee, because you’ll want to pay attention for this one!

First, a word of warning

As usual, a note before we get into the nitty-gritty:

While I’d love to make this overview as exhaustive as possible and get down into exactly when things happened down to the story arc level, trying to do so unfortunately presents its own unique challenges and would probably require an individual article devoted to each “season.”

First off, there’s the issue of whether we’re talking about the anime or the manga, since the each progressed a little differently. We also confront that issue here when doing a look at the timeline as a whole, but thanks (?) to the fact that the anime basically ignored almost all of the lore associated with Nehellenia and Sailor Galaxia, we’re basically left with following the manga here.

Second is the problem surrounding how we rectify the adventures of Sailor V with the very beginning of Sailor Moon. It’s probably safest to consider Codename: Sailor V not strictly a part of Sailor Moon‘s canon, but it is something that needs to be considered — especially considering how much information the manga provides on the Silver Millennium.

So this is all just a really long way of saying that I realize the following timeline glosses over the “major” events of the series, but that’s something I’ll circle back in on and discuss at a later date.

But now that we’ve got that out of the way, onto the timeline! For the sake of simplicity, I’ll be breaking the timeline up into three sections: Ancient Times, Modern Day,1 and The Future. 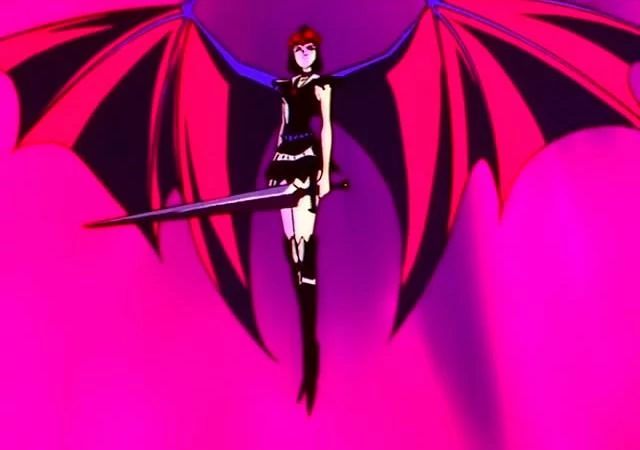 Not exactly the best picture of Chaos, but it’ll do

Though Ms. Takeuchi never says it specifically, I think it’s a safe assumption that the Galaxy Cauldron came into being around the time that the first stars began to form in the universe — roughly 200 million years after the big bang.2 This is also when Chaos comes into being.

The Age of Peace

Also known as the Silver Millennium, it’s not exactly clear when this takes place, but this is when Queen Serenity comes to the Moon, forms the Moon Kingdom with the power of the Silver Crystal, and helps protect the Earth from the negative particles. It’s a bit vague in the story, but it’s not exactly clear what the status of the Golden Kingdom is at this point and how life on Earth is going. So we’ll just conveniently ignore that.

However, it’s likely that Prince Endymion is not yet in the picture, because it’s later that…

Taking a page out of Sleeping Beauty, Nehellenia crashes the party celebrating the birth of the next Serenity in the family line and places a curse on them. Queen Serenity doesn’t appreciate this and banishes Nehellenia to a mirror.

Princesses Mercury, Venus, Mars, and Jupiter are already alive at this time and become the new Princess’ protectors, which begs the question of how old they actually are.

We can assume that since the people of the Silver Millennium live for approximately 1,000 years and hardly age a day that they could have been born quite a number of years before Princess Serenity. But, alas, the series is mum on this point.

Some time later, Queen Metalia is born out of some abnormal activity in the Sun — which we will later learn is Chaos’ doing. As for when this happens, there’s no real information on this, but since I doubt that Queen Metalia would just hang around doing nothing, I assume it happened shortly before…

I’m not sure you really need a summary of this incredibly iconic part of the story, but here we go:

An Earth woman named Beryl falls in love with Endymion, Prince of the Earth, but he’s in love with Serenity, the younger one and definitely not her mother. Beryl isn’t a fan of this, succumbs to Queen Metalia’s promises of power, and the two manage to brainwash/possess a sizeable Earth army, including Prince Endymion’s closest guards, the Four Kings.

Beryl accidentally kills Prince Endymion in an attempt to murder his girlfriend, Princess Serenity is overcome with sadness and kills herself, and Sailor Venus shows just how much of a cool fighter she is and kills Beryl.

Queen Metalia keeps fighting the good (?) fight, destroys the Moon Castle, beats back the Sailor Senshi, and Queen Serenity gives the last of her power the Silver Crystal in order to have everyone reincarnated on Earth in the distant future… with the exception of Luna and Artemis, who are put into a cold sleep to awaken at a later time.

Sailors Uranus, Neptune, and Pluto bring their talismans together to summon Sailor Saturn who basically kills absolutely everyone and every thing. Except Luna and Artemis, because… reasons.3

Again, the people on the Moon live long lives, so it’s entirely possible that this was a mere 14 years after Nehellenia’s curse, or hundreds of years. 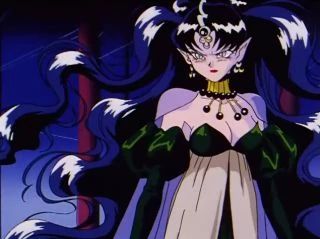 With Queen Serenity dead and the Moon Kingdom is gone, Nehellenia is free to bring her negative vibes back to the Earth, which Helios does his best to combat… with prayer. Such a good kid.

It’s not clear exactly when Nehellenia goes out to find the Sailor Quartet and bring them under her control, but this looks like as good of a time as any to throw that little plot device in. 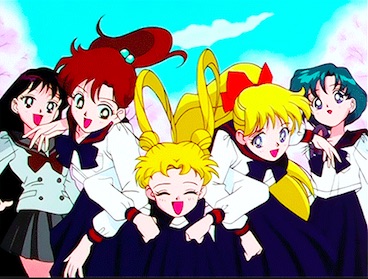 Queen Serenity obviously wasn’t clear enough about what she meant by everyone being reincarnated in the future, because the Silver Crystal literally reincarnated everyone–including the people responsible for this mess in the first place.

A year or so before the beginning of the Sailor Moon story, Queen Metalia awakens and once again finds her minions of choice: the newly reincarnated Beryl and the Four Kings. Around this time, Artemis also awakens from his cold sleep.4 Cue the start of Codename: Sailor V.

As I mentioned earlier, doing an in-depth look at each of the story arcs is beyond the scope of this article, but suffice it to say that a lot of things happened and there are a lot of mysteries surrounding time travel, so we may actually be dealing with several different timelines from the Black Moon arc and beyond.

Usagi becomes Neo Queen Serenity and founds Crystal Tokyo at the age of 22, roughly in the year 2000. ChibiUsa is born shortly thereafter, and the world experiences a prolonged period of peace.

Read also:  How Did the Sailor Senshi Get Their Planetary Names?

It’s not clear what exactly happens to the rest of the inhabitants of Earth, but I think we can assume that Usagi’s family and everyone else also were granted the same benefits by the Silver Crystal.

Under Neo Queen Serenity’s reign, the Earth enjoys a prolonged period of peace… that is, until Death Phantom comes around and begins to stir up trouble with a group of people who are unhappy with Queen’s rule and enforced peace.

Like all good rulers, she banishes them Nemesis, the theorized tenth planet that exists right at the very edge of our Solar System.

Over time, Death Phantom becomes one with Nemesis, and this planet/spirit hybrid will come to be known as Wiseman.

Some time later, Wiseman breaks Nemesis free from its orbit at the outskirts of the Solar System to make its way toward the Earth.

It’s not totally clear to me if the people who were initially banished from Crystal Tokyo are the same people who we see in the Black Moon arc or if they’re actually their ancestors. It’s entirely possible that once being banished from Crystal Tokyo, they no longer were granted (near) immortal life and they continued to have families, children, and whole new generations of Black Moon families who could grow up bitter toward the Neo Queen.

In any case, when Nemesis comes around, it comes with a vengeance. The Black Moon, helped by Wiseman, lays waste to Crystal Tokyo and the Sailor Soldiers, leaving a young ChibiUsa no choice but to escape to the past to seek the assistance in the past.

At some point in the far-flung future, Usagi (or, as some people might argue, Usagi’s descendant)5 becomes Sailor Cosmos, she fights against Sailor Chaos, things don’t go according to plan, and she goes back to the past. It’s all pretty vague here, so I can’t really say much more. 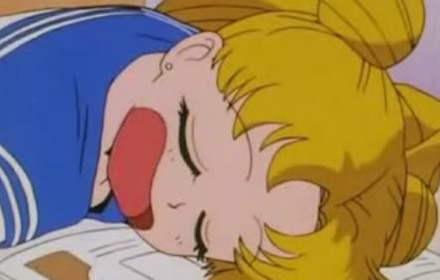 And that is pretty much the story of Sailor Moon in a nutshell!

I realize that I glossed over a lot of the more general parts of the series here, but I think that this at least touches on all the major important points when looking at the timeline without getting bogged down with specifics. At some point in the future I’d like to take a closer look at Codename: Sailor V and how it fits into the series lead up, but alas that’s another story for another time.

Is there anything I missed? Left out? Put in the wrong place? Let me know, I’d love to hear your thoughts!

21 thoughts on “What Does the Full Sailor Moon Timeline Look Like?”