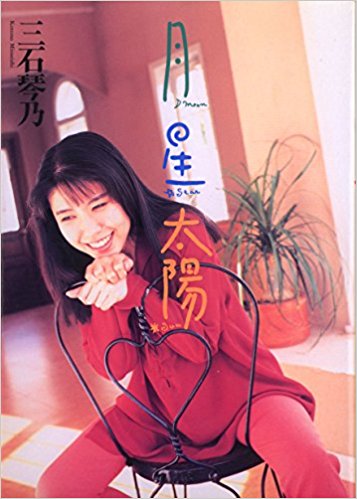 I have to say that I’m immensely grateful that Kotono has been so open about not only her life and career in general, but also for the fact that she took the time to share some of her memories with the Sailor Moon cast and producers in her 1995 auto-biography, Moon, Star, Sun.

One of the chapters in this book is titled “A day of tears and surprises,”2 which takes us through the first day on the job for the voice cast when they’d be recording their lines for the Sailor Moon S movie.

Interestingly enough, the voice-over recording started on November 6, which was less than a month before the movie’s debut on December 4, 1994.3 I knew they cut the deadlines for these movies short, but wow! I had no idea that they cut it that short.

Anyway, Kotono starts off by setting the scene for us and describing what it’s like for the voice cast when they get there. They’ve been given the scripts in advance, so the story isn’t exactly a surprise, but they’re told the day-of if there had been any last-minute changes to the lines, or scenes that were cut, etc.

Then the voice cast are all brought in to a room to sit down and watch the movie without voices – since they still haven’t recorded yet – to get a feel for the scenes and an idea of what kind of facial expressions the characters are making. This probably helps explain why the audio recording was done so late in the game, since they wanted most of the anime finished before starting that voice work. 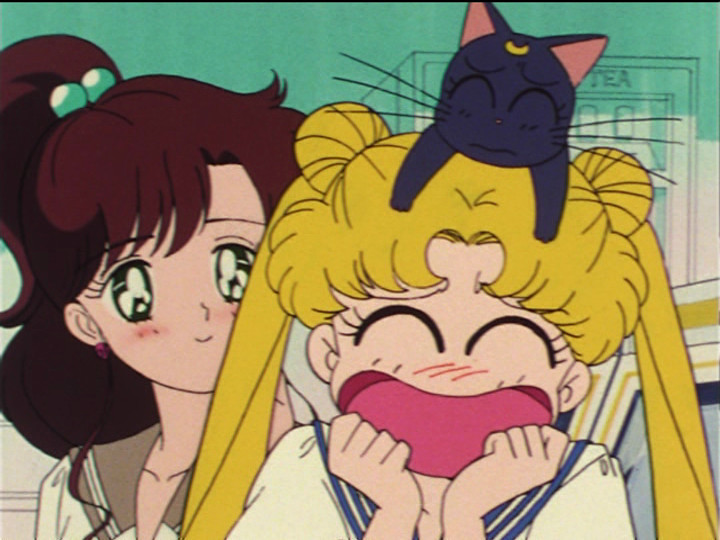 Aren’t Usagi and Luna adorable together?

Kotono the describes how she felt when she first saw human Luna on screen, and how beautiful the relationship between Usagi and Luna was. She described it as:

Seeing Usagi hug Luna like that, I fell even more in love with her character. Through both the good times and the bad, she’ll shed tears for them both. Whether a friend or a lover, it’s wonderful to have someone like that at your side.

With that out of the way, audio recording began in earnest. This is a pretty intense and involved process, but the voice cast was pleasantly surprised to have their day broken up with a brief visit from Ms. Takeuchi herself, who came to bring the voice actors sushi for lunch. It really is great to see that they were on such friendly terms, which is something that Ms. Takeuchi often discussed herself in the manga liner notes.

The story takes a bit of a comedic turn here, when Kotono brings up the fact that the studio had actually already provided bento boxed lunches for the staff, which went neglected in favor of Ms. Takeuchi’s sushi. 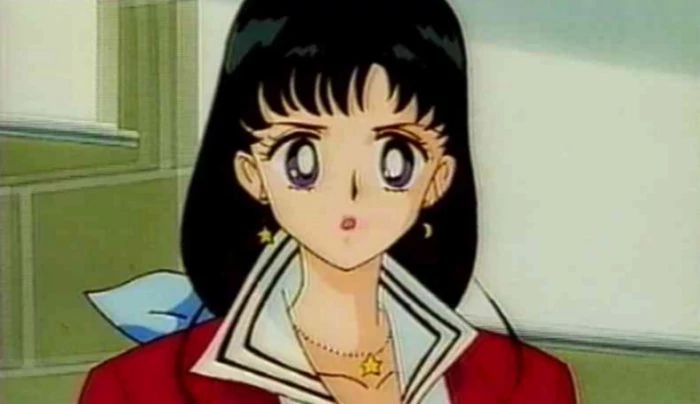 Himeko Nayotake AKA that harlot that stole Luna’s man

Never one to turn down food, apparently, Kotono and Megumi Hayashibara4 – starring in the Sailor Moon S movie as Himeko Nayotake – tore into the lunches and ate them as well.

Not five minutes later, the producer (who I presume is Iriya Azuma, though she doesn’t give his name specifically) comes by and asks what happened to the spare lunches, though the two women just exchange a look and neither fesses up to the crime. They manage to find the last one that they had missed and hand it over, so I guess it all worked out okay for them!

After lunch, the lights suddenly were turned down, and out came a cake for Kae Araki,5 voice of ChibiUsa and Sailor ChibiMoon. As it turns out, the first day of recording also happened to be her 29th birthday! They sang, she blew out the candles, and by some sort of miracle Kotono was able to also eat some cake as well.

I guess she and Usagi have a lot in common.

And there you have it, a day on the set of the Sailor Moon S movie voice-over work! It’s a pretty short story, and obviously not what a typical day is like on the recording set, but I think it was really fun to read about what kind of interesting events happened behind the scenes with all these great vocal talents.

As for the stories of drama and intrigue, I actually do have a few stories written by people who worked on the animation side of Sailor Moon who have had some less-than-charitable things to say, but that’s another story for another time. In the mean time, who’s your favorite Sailor Moon voice actor/actress? Megumi Ogata and Kotono Mitsuishi are usually the front-runners in being out and public, but I’d love to see who else deserves a closer look!

3 thoughts on “What Was it Like to Record Audio for the Sailor Moon S Movie?”