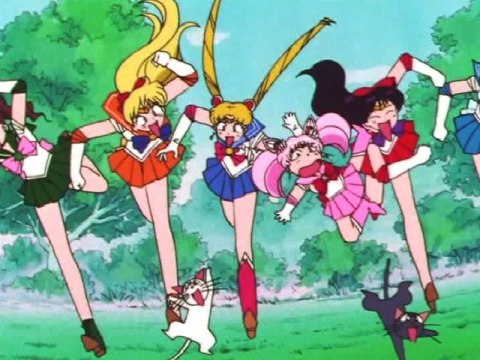 One common theme that runs through many of the topics I end up discussing is that of the differences between Japanese and English nuance, and how much of that gets lost in translation.

I want to make it clear that I don’t mean this as an indictment against some of the translators who have taken on (or been assigned) the challenge that Sailor Moon has to offer. In fact, I’d like to take a look at some of the challenges people face when translating Sailor Moon – or really, any Japanese media with a sufficiently deep enough plot – into another language.

This topic may be a little inside baseball, but if you’ve ever been interested in the art of translation, this article may be for you! 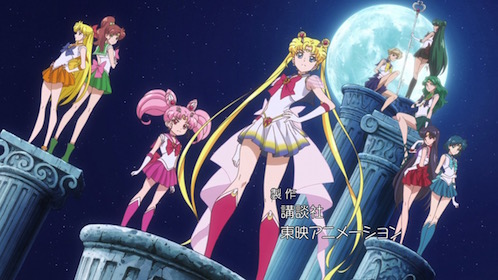 It’s about to get serious!

One of the things that makes translating a fictional story incredibly difficult is that, quite frankly, you can never really be sure if you’ve made to correct choice. After all, there’s no encyclopedia you can cross-check, and when you’re talking about something totally unique to the story, you might only have a few sentences, your gut instinct, and your sense of the story’s lore to go by.

The other major difficulty that translators face is striking a balance between telling a compellingly written story and staying true to the nuance of the original text. The Japanese language is built largely on implication and subtext, which makes for some pretty harsh-sounding sentences if you don’t rewrite things. But when you do, you’re depriving readers of the same experience Japanese fans had, right?

So we’ll be talking about four cases of these issues today, and about the problems these linguistic issues cause both the translators and the fans who read/watch the end product. 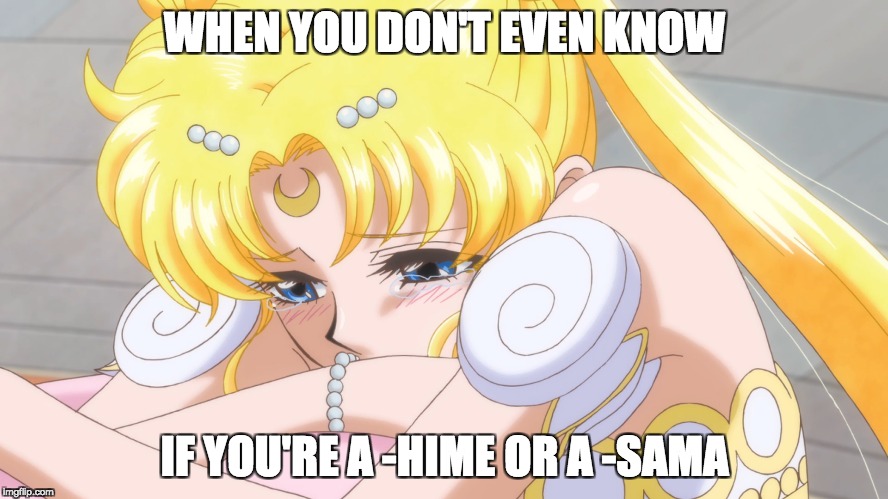 The horrors of honorifics

“Protect the Princess-hime-chan-sama!” The Horrors of Honorifics

Any long-time fan of Japanese anime, manga, games, light novels, J-dramas, sentai shows, or any other form of Japanese media is probably familiar with many of the most common Japanese honorifics: -sama, -san, -chan, -kun, etc.

You probably are also aware, at least on some level, of what additional meaning they convey about the relationship between the two or more parties involved.

So what’s the problem here? Well, while these additions do add some (sometimes important) nuance to the Japanese source text, leaving them in when translating to English is a bit of a cheat since it makes the translation more of an “English-fied Japanese sentence” and not an English-language version of the original Japanese.

That gets even more problematic when translating text from a manga/anime where the speakers shouldn’t even be speaking Japanese in the first place, such as a Japanese manga adaptation of a western movie.

There’s no right answer on how to deal with this, but it’s something that the translator needs to decide while thinking about their target audience and the setting in the series. Personally, I almost always cut out honorifics in translation, but that’s because I value a more natural-sounding end product. 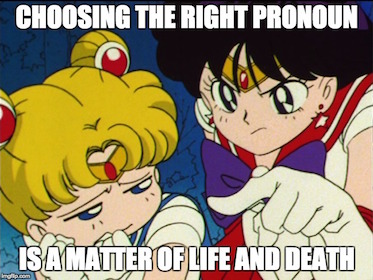 Don’t get caught using the wrong one!

Me, Myself, and I: The Problem With Pronouns

I’ve already discussed at length some of the issues with first-person pronouns that come up when translating Japanese into English. One of the most popular examples is with Haruka in the manga. In the manga, she uses both the feminine アタシ (atashi) to refer to herself as Sailor Uranus and the more masculine 俺 (ore) when talking as Haruka.

The anime just threw this all together into the still male-focused, but more boyish, 僕 (boku) and dropped the nuance of her changing between the two.

Both Hawk’s Eye and Fish Eye also use the feminine アタシ (atashi) in the manga, while all three of the Amazon Trio use the boyish 僕 (boku) in the anime.

But what’s most noteworthy about this issue is that, to an English audience, there is exactly zero difference between all of these words — they all translate to “I.”

So what’s a translator to do? Unfortunately, there’s not much they can do, other than maybe translate the rest of the sentence to read more gruff or feminine, depending on the pronoun. But it’s definitely a tough issue to face as a translator. 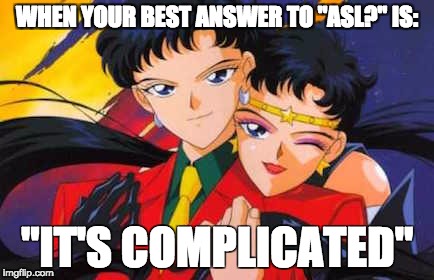 Is Kinmokusei a Planet or a Star?

This is one of those issues where we simply don’t have enough information within the series, and there’s nothing outside the series that we can refer to in order to get a clear answer.

You see, the problem arises from the fact that the last character in Kinmokusei (キンモク星) is 星 (hoshi, sei), the kanji for “star.” At first blush this may seem like an open-and-shut case, but unfortunately it isn’t. You see, Japanese refers to many types of astral bodies as 星, regardless of whether or not they’re a star.

A great example of this is Final Fantasy VII. You know how the story focuses on hearing the voice of the plant, the planet crying out, saving the planet, and all that good stuff? Well, the “planet” is referred to in all Japanese text as — you guessed it! — 星.

All of the planets in our solar system (with the exception of Earth) also end in the kanji 星 (e.g., Mercury = 水星, Venus = 金星, Mars = 火星…), which pretty much cements in my mind that Kinmokusei is actually the planet Kinmoku.

As for leaving the –sei on at the end? I would leave it. Why? Because the planet name is a clever reference to the flower of the same name, kinmokusei, known as Osmanthus fragrans.1 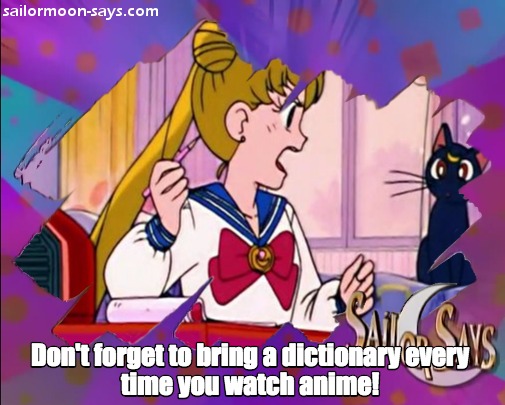 Gonna need to look up some words!

“A Rose by Any Other Name…” Translate It or Leave It?

So we’re all pretty much okay with Tuxedo Mask, but Sailor Mini Moon makes fans cry tears of blood.

This is a big issue that all translators face when confronted with either made up names, or names that use real world words in them. To what extent should you stick close to the source material and leave it in Japanese? And at what point does leaving it in Japanese hurt the reader’s understanding of the story.

When confronted with nearly any proper noun, the translator is going to have to make a choice on how they want to deal with this, and where to leave the Japanese and where to change it to English.

When I translate manga, my general rule of thumb is: did the author use this word because of an important nuance/unique name, or did they intend readers to interpret it as-is?

In the case of Tuxedo Kamen, his name is literally a combination of the words “tuxedo” and “mask.” Just like we wouldn’t call him Takishiido, I’d say it makes more sense to translate Kamen into Mask.

However, since “Usagi” is a proper name, and we don’t generally translate names (i.e., “Rabbit” or “Bunny”), “ChibiUsa” in turn should also be treated as a proper name. Though her name comes from combining chibi (small) with Usa, this becomes her actual name and shouldn’t be parsed separately. Similarly, this carries over to ChibiMoon, which is why I wouldn’t translate it. 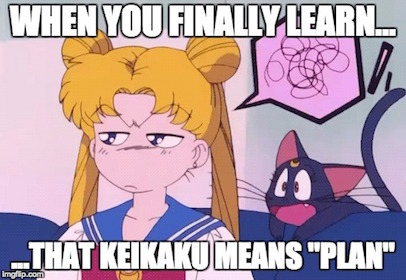 Wait, is THAT what keikaku means??

Though I wish I could say definitively what is correct when you’re translating, unfortunately the fact of the matter is that the answer is almost always “it depends.” While I know the way that I would do things, that doesn’t necessarily mean another translator doing it differently is wrong.

What’s ultimately most important is taking into consideration what the needs are of the reader. Do they need to understand the absolute minutia and fine nuance, like when reading a contract translation? Or do they just want to read a fun story that happens to have been originally in Japanese? Ultimately, I think “right” and “wrong” is for the reader to decide.

8 thoughts on “What Are Some Difficulties Faced in Translating Sailor Moon?”