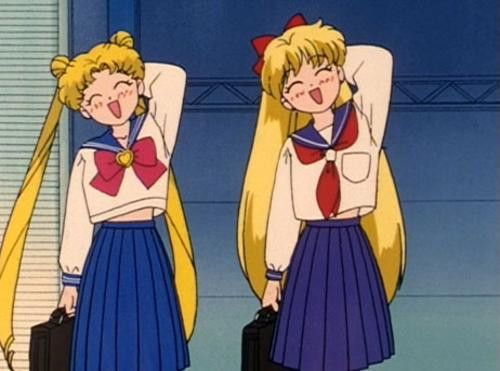 For the sake of our sanity, and in the interest of making a fair comparison, I’m going to restrict the discussion today to only the manga versions of each character. As much as I’d like to go on about how different they were in the anime, and even in the live action series, it unfortunately makes things a lot more complicated.

Also, there’s the fact that Minako was, at least in my opinion, often kicked to the curb in the anime in favor of focusing screen time on more popular characters.1

With that out of the way, I figure the best way to approach an article like this is to break it down into their similarities and differences, then come back together at the end for a final wrap up. Sounds good?

The Rabbit and the Goddess: One and the Same

Let’s get the most obvious one out of the way first: Minako and Usagi look a lot alike. So much alike, in fact, that Minako even played the part of the Moon Princess in an attempt to mislead anyone out to harm Princess Serenity.

But that’s not all they share in common. Their general approach to life, in fact, is incredibly similar.

Starting with school, Minako and Usagi both:

At least in Minako’s case, you can make the argument that she’s somewhat more serious about her grades than Usagi since she’s attending cram school. Alas, when you consider that she’s going to cram school and still scores so poorly,2 it kind of makes you wonder if Usagi is as dumb as people make her out to be…

After a hard day of school, heroine-ing, or pretty much anything else, both of our sailor-suited warriors of justice tend enjoy a good nap… when their respective magical cats aren’t bothering them.

Speaking of relaxing, their hobbies are practically identical:

While they each were granted a magical item that could change them into whatever they happened to need (the Disguise Pen for Usagi and the (crescent moon-shaped) Compact for Minako), both of them had the odd tendency of choosing costumes that didn’t exactly fit the situation they were in. For example, Usagi decided to disguise herself as a flight attendant in order to get onto Jadeite’s Evil Bus™, while Minako made the peculiar choice of walking into a concert dressed as… a soldier?? 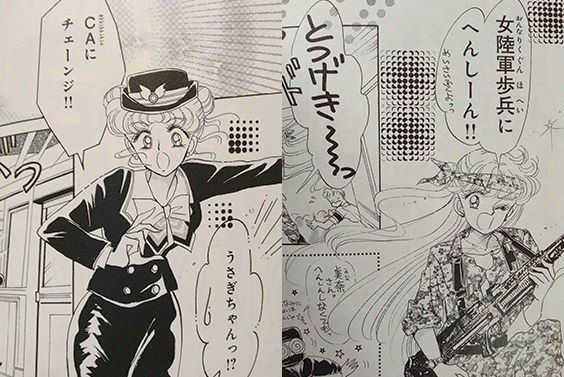 Sometimes I wonder if anyone truly understands Minako

While this last point may not pertain to Usagi and Minako in particular, there are a ton of overlapping/similar characters shared between the two universes:

So, as you can see, there’s definitely quite a lot shared between the two, personality wise. But that’s not to say that there aren’t significant differences, too.

The Bunny and the Deity: One of These Things Is Not Like the Other

Probably the most obvious difference between Usagi and Minako right off the bat is that Minako is athletically gifted. Incredibly gifted, in fact, that she is something of a star volleyball player.

Poor Usagi, on the other hand, has a hard time walking a straight line without falling flat on her face. Sports are, for our rabbit-inspired hero, pretty much out of the question.

This also shows itself in their early battles against youma when they first begin their Sailor adventures.

While Minako is quick to dive into the fray and start kicking people’s faces in,4 Usagi spends the majority of her initial fight running for her life from the possessed Osa-P shoppers and is only forced to confront them when she trips and falls.

Even then, outside of an occasional Sailor Kick here or there, Sailor Moon almost universally prefers fighting using her tiara and other magical powers rather than relying on anything physical — something that Sailor V has absolutely no qualm doing.

Somewhat tangentially related to their fighting styles is their respective approaches to being super heroines. I get the impression that Minako, who’s dreamed for most of her life to someday become an idol, truly loves being Sailor V. Sure she’s doing good for the world. That’s nice and fun and all. But it also gives her a chance to play dress up, kick some butts,5 and be someone truly important.

Though Usagi may not necessarily hate being Sailor Moon, she’s definitely a lot more hesitant to get involved in all the danger going on around her in the beginning and needs more than a little prodding from her cat companion Luna.

And speaking of cat companions, though Usagi and Luna may have their differences, Usagi generally adores Luna and looks to her as something of a mentor.

Luna and Artemis’ treatment is a tad different, to put it mildly

Minako, however, tends to view Artemis as more like a partner, for better or for worse. While that means that they spend a lot of time working together and she generally takes him along on all her outings, Minako doesn’t seem particularly inclined to take much scolding from him and shows no hesitation to give him a piece of her mind.

Last but not least is the massive difference between the two’s disposition. While both are generally cheerful by nature, Minako is strong willed and will stand up to practically anyone. Her line, “I never cry!”6 stands in stark contrast with Usagi’s admission of being something of a crybaby.7

Whenever someone comes along and tries to say that Usagi and Minako are pretty much the same character, it generally is the case that they’ve either only been exposed to the anime, or that at the very most they’ve  seen the manga and have only heard of Codename: Sailor V.

Personally, I think there’s a lot to be said for the fact that there are so many similarities between Usagi and Minako, and even in the characters that surround them. However, even with all that, I think this is more a case of the two coming from the same generic template dreamed up by Ms. Takeuchi and then given a life of their own rather than Usagi being a direct copy of Minako.

But at least that’s my take on the situation. What do you think of the whole Minako = Usagi debate? Do you think the original concept for Minako was spun off into Usagi, and then the character of Sailor Venus was developed later by Ms. Takeuchi, or were they always separate characters in her mind? I’d be interested in hearing your takes!

11 thoughts on “Is Usagi Just a Copy of Minako from Codename: Sailor V?”