Among all of the special items that Luna gives Usagi and all of the other Sailor Soldiers, I’ve always felt that the Disguise Pen was one of the most interesting, and yet also the most under represented. How is it that you could have a pen that could turn you into whatever you wanted to look like (and typically allow you to look like a grown adult despite being a fourteen year old girl…) and yet so rarely ever use it? In fact, out of its 11 appearances in the anime and six appearances in the manga,1 all but two of them in both the anime and manga occurred in the the Dark Kingdom arc.

What particularly interests me, though, is how more often than not Usagi manages to use the pen wrong and all the while still gets a semi-satisfactory result. What do I mean by that? Well, let’s take a look!

A good place to start is, of course, at the beginning. The Disguise Pen first appeared in Act 2 of the manga (with the introduction of Ami) but appeared earlier in the story in episode 3 of the anime. For the sake of comparison, we’ll use the manga for now.

When Usagi rushes into the cram school to save Ami, she decides to disguise herself as a medical professional – specifically, a “University Hospital Doctor.”2 What’s interesting about this, though, is how her transformation ends up. In the anime they show her as a short-haired doctor in a white lab coat, but in the manga she looks like her normal self, but in a… nurse’s uniform? That’s right: this is where we first get a glimpse at the possibility that – in the manga at least – what Usagi transforms into is based more on what she envisions the job being like that what it actually is. 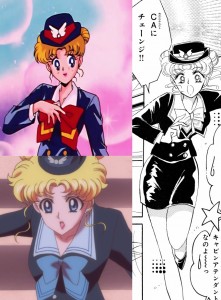 Next up is Usagi’s rush to disguise herself so she can enter the Cursed Bus after leaving the Hikawa shrine.3

Putting aside the fact that Usagi trying to disguise herself in order to enter an evil bus clearly being operated by the enemy (and how ridiculous it is for Jadeite to fall for it), what’s interesting about this is that once again Usagi mistakes the name of the job that she’s thinking of. While she’s clearly thinking of what is known in Japan as a “bus attendant” or a “tour guide” (a – typically female – staff member who accompanies the driver on the bus and entertains the passengers, takes care of issues, and often guides tour groups at the destination)4, in the anime and manga, she once again makes a mistake and asks to transform into a stewardess.

Interestingly enough, this has changed with every release of the manga, though it’s always been wrong. In the original manga, she says she wants to be a stewardess, in the re-release she says succhi,5 the Japanese abbreviation for stewardess. In the latest complete (kanzenban) release, this has been changed to “CA” (cabin attendant)6 As an interesting aside, judging by the design on her cap, it’s likely that Usagi (and Ms. Takeuchi!) was thinking of the so-called “eighth generation” flight-attendant uniform of All Nippon Airways, introduced in 1990.7

It may seem obvious, I suppose, but it’s interesting to consider that what Usagi ultimately disguises herself as is, more than likely, the image that she has in her head of a given job and less to do with the words she actually says. Her view of a “musician” in episode 6 of the anime is particularly… interesting.

The Disguise Pen had so much potential, but definitely was under utilized as the anime continued. I suppose I can’t really blame the anime or the manga for it, though, when you consider that the cast grew larger and larger with each passing season, and the Disguise Pen was a gimmick that only Usagi could participate in. Still, considering how much it could do, I really would’ve loved to see more of it!

3 thoughts on “How Did Sailor Moon’s Disguise Pen Work?”