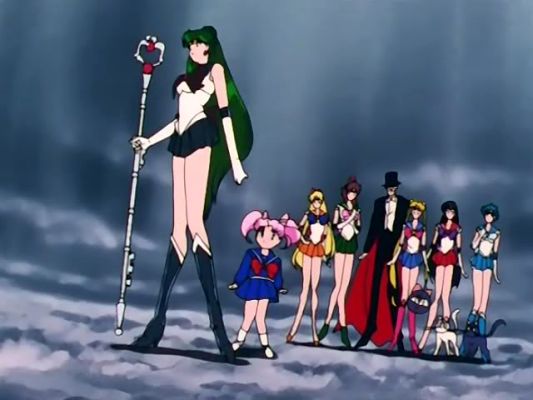 While some may refer to Sailor Pluto as the Guardian of Time, I find myself typically referring to her by a very different name: the Soldier of Convenience.

It’s not that I don’t like her character — quite the opposite, in fact! — but more that it seems like so little thought was given to her background and motivations that she winds up just filling whatever plot hole the series is dealing with at the time.

As if that wasn’t confusing enough, we also need to contend with the fact that there are actually multiple Sailor Plutos within the Sailor Moon timeline!

… I mean, you knew that there were multiple Sailor Plutos, right?

Well, dear reader, it looks like we have an interesting conversation ahead of us. I hope you’ve had your coffee, because you’ll want to be awake for this!1

So when I say that there are multiple Sailor Plutos, what do I actually mean by that?

There are obviously multiple Sailor Moons out there: Original, Super, Eternal, Chibi Chibi, Cosmos, and possibly Princess Serenity, depending on if you count that as a transformation. But that’s not what I’m referring to with Sailor Pluto.

In its simplest form, I mean basically that the Sailor Pluto we see throughout the series is not always necessarily the same person, and that there are quite likely more than one of her existing in the same universe at the same time.

Take, for example, the original Sailor Pluto that we’re introduced to in the Black Moon arc of the manga.2

From what we’re told, she has lived from the age of the Silver Millennium, survived through its collapse, and has dutifully stood guard at the Door of Space and Time all the way through the “modern era”3 and on until the events in Crystal Tokyo unfold in the Black Moon arc. 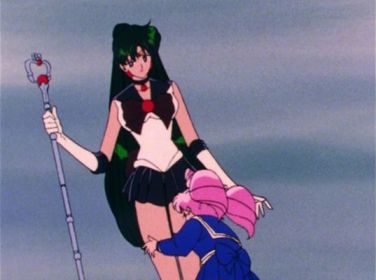 For the sake of convenience, I shall call her the “Original Pluto,” and that’s only because it sounds mildly more professional than my first draft of this article where she was dubbed the “O-Puu.” You can thank me later.

After she breaks her sworn oath and uses the forbidden ability of stopping time, the Original Pluto dies in the 30th century.

Neo Queen Serenity, either realizing that this was totally a jerk move to begin with or due to the need to perform her annual Queen-ly pardon, uses her power to have the Original Pluto reincarnated back in the “modern era” as Setsuna Meioh in the Infinity arc.

First and foremost, assuming that Setsuna was actually reincarnated as a baby back in the past, this means that she would have already been alive — and likely even classmates with Reika! — all the way back in the Dark Kingdom and Black Moon arcs. But since she had not yet woken up as Sailor Pluto yet, we will put that issue aside and just assume that she was living a normal life at the time. We’ll call this new Sailor Pluto “Setsuna,” for obvious reasons.

For those playing along at home, this technically means that during the Infinity arc, there are two Sailor Plutos existing concurrently in the Sailor Moon universe: the Original Pluto, who is still sitting at the Door of Space and Time and guarding it, and Setsuna, who is busy adventuring with Sailors Neptune and Uranus.

But this wouldn’t be an interesting discussion if that was all there is to it. Oh no, dear reader, there’s a third Sailor Pluto out there that throws a wrench into this delicately-crafted story.

Fast forward to the Sailor Stars arc,4 after ChibiUsa returns to the future and is greeted by her parents. We’ll get back to the problem with this scene in a second, so hold on for a bit.

Anyway, upon her return, ChibiUsa notices that something strange is going on now that she’s home, and that the sky is looking pretty ominous and foreboding. So, as one does, she decides to go in and check on Sailor Pluto.

Sailor Pluto reports to the Queen

What ChibiUsa finds instead is that Sailor Pluto is busy reporting to her mother, Neo Queen Serenity, about the events unfolding in the past and how they may have an impact on the future.

Now here’s the problem with this scene: at this point in the story, all of the Inner Sailor Team are already dead. If the past was having an impact on the future, then she should have noticed something by now. Indeed, King Endymion’s presence at ChibiUsa’s arrival makes it pretty clear that the past is actually not affecting the future, on account of the fact that he’s kinda… you know… dead in the past.

And yet, a mere three chapters later,5 we find Neo Queen Serenity kneeling over Luna and Artemis as she watches them fade away mere moments after they die in the past. On the following page, we see that the Sailors are all in caskets of sorts and their chests are shining, indicating that their Sailor Crystals have been stolen.

The obvious interpretation of this whole scene taking place in Crystal Tokyo is that there was a “time lag” of sorts in the order that events took place in the past and when they were reflected in the future. Or possibly that Chaos followed ChibiUsa into the future, which is what started connecting the past events to the future.

Both interpretations, however, fail to explain away our Sailor Pluto conundrum.

The Sailor Pluto that ChibiUsa spies reporting to Neo Queen Serenity cannot be either Original Pluto or Setsuna. The reason for this is quite simple:

Had the Original Pluto somehow survived and continued to live on, she would continue to be her normal, first-form self. If Setsuna had lived on from the past and on into Crystal Tokyo like the rest of the Sailor Soldiers, then she would be in her Eternal form. Even if the battle with Sailor Galaxia and Chaos had never happened, she had already powered up into Eternal during the Dream arc, so she absolutely would have that power.

The Eternal Senshi as of the end of the Dream arc

“Wait a tick,” you say with a heavily-forced fake British accent, “what if ChibiUsa is returning to the future that she left — from the Infinity arc? Maybe this is a parallel future where the events of the Dream arc never happened!”

Also a good idea, but it doesn’t work out in practice.

Well, because the Sailor Quartet are waiting for ChibiUsa in the future. This means that, at the very least, the events of the Dream arc had to have played out.

Basically, what this means is that we have a completely separate, third Sailor Pluto (Alternative Pluto) that exists in Crystal Tokyo and serves Neo Queen Serenity and know exactly nothing about her.

Yeah, umm… no clue on this one

I hate to end an article without having some sort of strong conclusion, but unfortunately there’s really no conclusion for us to reach here, with the limited information we have. The best possible explanation is that ChibiUsa comes “back in time” from alternative futures, and that the universe that this ChibiUsa came from is in a post-Infinity universe where the Dream arc never happened.

That doesn’t explain away the Sailor Quartet, unless you want to argue that Nehellenia never even existed and thus never took the Asteroid Senshi’s stones, and instead leaving them to slumber in the Amazon rain forest until the future. But that raises the question of why future ChibiUsa didn’t already know about them, and introduces a whole lot of other plot holes.

So anyway! If you have any ideas on how to make sense of this whole situation, I’d love to hear your theories down below! Maybe we can hash out something reasonable out of this together.

33 thoughts on “How Many Sailor Plutos Are There in Sailor Moon?”