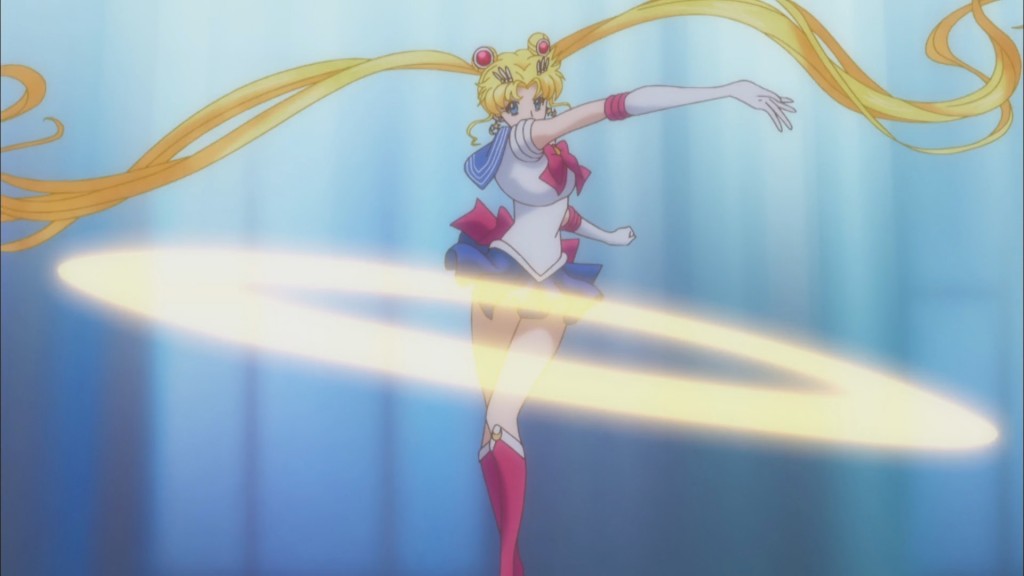 Few attacks in the history of the Sailor Moon series have undergone as many alterations as the sailor-suited soldier’s debut attack in both the manga and the anime. While it’s up for debate whether or not her crying, which unleashes ultrasonic sound waves that distract the youma Morga in the midst of her assault,1 is a special attack in its own right, in the tradition of most anime and live-action shows in the sentai fighting-force line, I think it’s fair to say that anything without an explicit name is just a part of them being super soldiers of justice. Otherwise, you will need to start coming up with names for their ability to jump to high places, a name for Sailor Jupiter’s punching, and more. That said, Sailor Moon’s tiara is the first named attack, but its name has gone through several major changes. What gives? 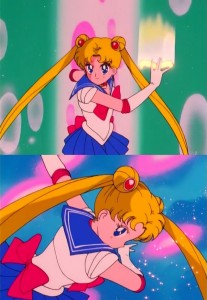 We know that it involves Sailor Moon taking off her tiara, causing it to form into a disc, and then throwing it at the enemy (usually killing them, even chopping the youma’s head off in its first appearance,2 though it was also used to trap Jadeite),3 but unlike many of the other attacks in the series, this one seems to go by a different name with each incarnation.

In its first appearance in the Sailor Moon manga, the attack is simply called Moon Frisbee. When it appeared less than a month later in the first episode of the anime, it made its debut as Moon Tiara Action. With the shinsouban re-release starting from 2003, this attack then became known as Moon Tiara Boomerang,4 which is also the name that was ultimately used by the live-action drama airing around the same time.5

Now, to get to the actual subject at hand of where the name changes come from, the first issue of the manga to anime change obviously comes from the term “Frisbee,” which is a trademark for the popular flying-disc toy held by the the Wham-O toy company.6 This is probably not a risk that TV Asahi wanted to take, so it was quite reasonably changed. 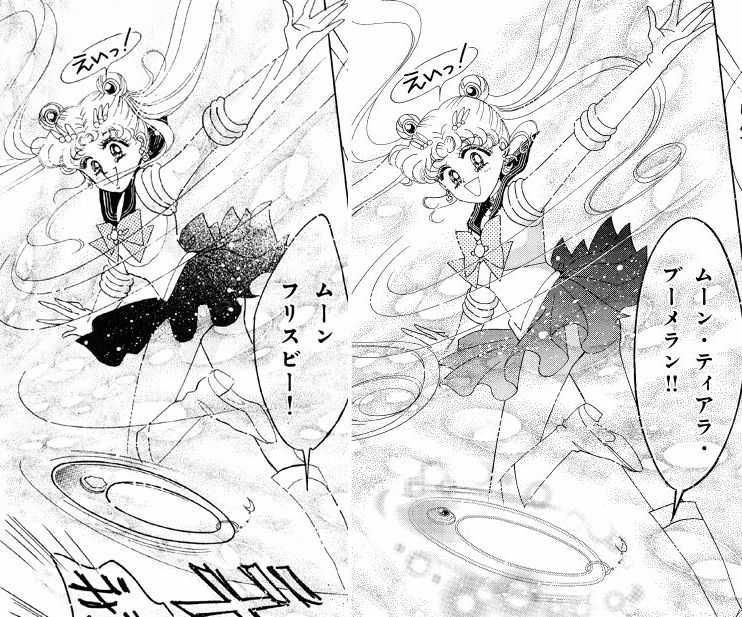 Also of note here is that in the original manga, Luna only told Usagi to shout “Frisbee!” to call out the name of her attack – it was Usagi’s invention to add the “Moon” label in front if it. This has been changed in later versions for the whole attack phrase (i.e., “Moon Tiara Boomerang”) to be given by Luna.

The mystery, though, is in where the term boomerang came from. Just by looking at it, you can see that it doesn’t resemble any common form of boomerang, nor does she even use it in a boomerang-like fashion, which is thrown vertically and not horizontally.7 What’s more, you can clearly see that the ends of the tiara come together and form a ring or a disc – most definitely not something I’d be inclined to call a boomerang. 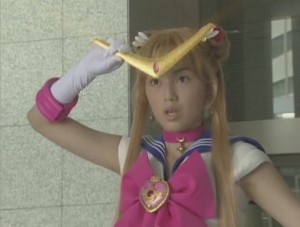 The Moon Boomerang in Question

What follows is pure speculation on my part, but it’s my belief that it got the new boomerang moniker thanks to the live-action series which, as mentioned above, uses the same name. If you look at the publication dates, you’ll see that the first volume of the shinsouban re-release  hit the market on September 22, 2003.8 The TV drama first aired at 7:30am on October 4, 2003,9 with the second episode (in which the Moon Boomerang makes its appearance) airing a week later, on October 11. Considering the lead time needed to scout out locations, record the episodes, make props, and get the special effects work done, it’s pretty obvious that there’s no way it could have all been done in the 19 days between the updated manga publication and the appearance on TV. This was obviously discussed between Ms. Takeuchi and the staff behind the show. 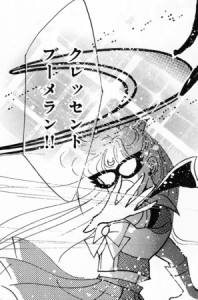 Once again, this is just speculation, but it’s my feeling that because this was going to be a TV show with a relatively modest budget, it was easier for them to use a boomerang prop rather than try to make the pure-energy disc that appeared in the anime, or the flying ring in the manga. What’s more, boomerangs (of the non-returning variety) were used by the Aboriginal Australians as hunting weapons,10 so it isn’t too hard to see how that made for a better choice than a thrown ring. Sailor V also has a boomerang attack (the “Crescent Boomerang”), so Ms. Takeuchi is clearly aware of the difference.

Ultimately, I believe that Ms. Takeuchi updated her manga script to match the live-action drama rather than the other way around, since it’s pretty clear that these releases were timed to complement each other.

Regardless of what the attack is called, it’s still essentially the same in all versions and has the same effect on the enemies, but I really do wish that some more thought had gone into the re-naming to “boomerang” in the manga. Obviously it’s difficult to come up with a cool and exciting name for a disc, but with the new Sailor Moon Crystal now using the manga attack names as well, it really brings into focus just how inappropriate the name really is.

All the same, it’s always amazing how something as simple as a tiara can make compelling Sailor Moon trivia and just goes to show that there’s a lot more behind the universe and its characters than you can see at first glance!

13 thoughts on “How Did the Moon Frisbee Become the Moon Boomerang?”