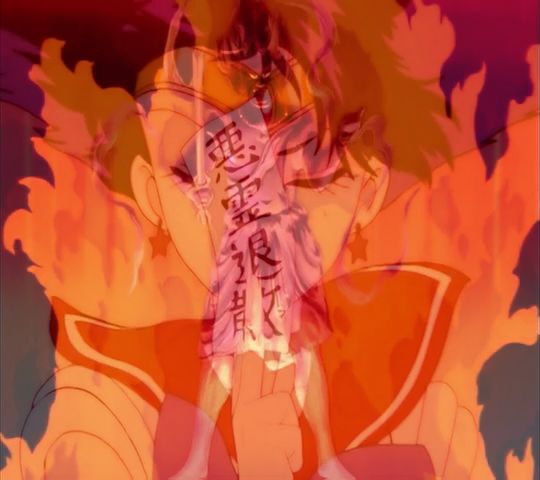 Mars and the Mysterious Demon

One thing that’s always been of great interest to me is the story about the demon that appears in the background when she throws her ofuda and stuns enemies. I’ll admit that, having first seen Sailor Moon with the (censored) DiC dub, the first time I saw the demon – which they forgot to censor in one episode of the first half of Sailor Moon R (in the Doom Tree saga)1 – it was pretty terrifying. It didn’t help that it was 2am and in a dark room, of course. So what’s the story behind the demon? Who is he, and what is his connection to Rei and her banishing of evil spirits? 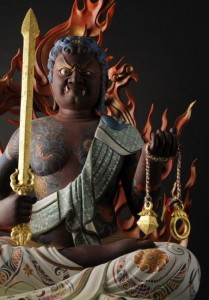 As we’ve already discussed in the past, Rei’s use of religion is a bit of a mixed bag in the Sailor Moon series (and the anime in particular), so it shouldn’t come as much of a surprise to find out that this demon isn’t actually a Shinto god at all, but actually can be traced back to Buddhism. Now, that’s not to say that Buddhism and Shinto are two completely separate entities. They were originally, of course, but over the years (and in a desire to try to explain away inconsistencies in beliefs), many of the Buddhist bodhisattvas2 (in a nutshell, someone who has come to understand the trues teachings of Buddha; akin to a saint in Christianity) came to be worshipped as Shinto gods, and many popular Shinto gods were considered to be bodhisattvas. In the case of Rei’s banishing of spirits, however, there’s a strong and clear Buddhist connection.

The demon that we see here is not a demon at all, but rather the Buddhist god known as Acala,3 one of the five Wisdom Kings,4 who is traditionally depicted with a sword in his right hand, a lariat or a noose in his left, and fire in the background. Acala, known as Fudou Myou’ou (不動明王; Unmoving Wisdom King), gained quite a following in Japan5 and had a great deal of art, statues, and no less than 34 temples dedicated to him.6 Considering that strong tradition, his warrior-like nature, and the association with fire, it’s not too surprising that he was a good fit for Rei’s warding off of evil energies.

It seems like the more you look, the more there is to find in the Sailor Moon universe, and I’m always impressed at just how far not only Ms. Takeuchi went, but the TV Asahi and Toei staff in creating the companion anime series. It’s always exciting to see what other mysteries there are to uncover!

5 thoughts on “Who Is the Demon Standing Behind Sailor Mars?”