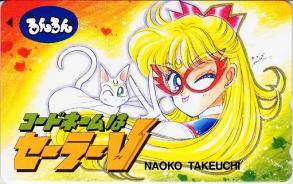 Sailor V: the OTHER Sailor Suited Solider of Justice

Which is what we’re here to talk about now… or at least as it relates to the manga. That’s right, we’re not touching the anime today, because it pretty much doesn’t overlap at all. But I digress.

Anyway, part of the problem comes from the sheer length of the series. Obviously most fans are aware of the fact that Sailor V debuted before Sailor Moon. This is pretty obvious considering that the former served as the inspiration behind the creation of the latter. What they may not know, however, is that Sailor V also ran longer than Sailor Moon.

The publishing schedule is a bit complicated, so I think a table is in order:1

There are two very interesting observations we can make from this chart.

First off, you can see that the Sailor V series itself was written out of order, with the initial two arcs (as eventually published in the manga collection tankobon) only being written a whole two years after the series debuted.

The second noteworthy detail is that Sailor V ran longer than Sailor Moon by both starting earlier and ending later.

While the first point is interesting and probably merits a conversation down in the comments below, it doesn’t really have much to do with our discussion on the canon-ocity2 of the series, so we’ll have to table it for now. 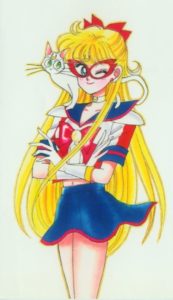 As I mentioned above, the length of the series draws attention to a small issue: while it’s generally accepted (or at least I hope it is?) that the stories in Sailor Moon didn’t necessarily play out at the same speed as the issues were released, Minako would be hard-pressed to fit all of her misadventures into the one year or so from when she started adventuring as a super heroine of love and justice and when she joined forces with the Sailor Team.

Even if we were to grant Minako a little bit more time to account for her adventures overlapping with Usagi’s, that still doesn’t account for Sailor V becoming such a hit pop-culture phenomenon that entire video games are developed and released starring her in such a short period of time.

The other big problem that we have to contend with is that Sailor Moon doesn’t actually touch on what Minako did in her role as Sailor V, and when it does mention it, the story doesn’t line up with what we see in the companion manga.

How so? Glad you asked!

According to the Sailor Moon side of the story, Sailor V was a mysterious hero running around Azabu-Juban who was thwarting criminals3 and apparently pretending to be the Moon Princess, though it seems like the Dark Kingdom hadn’t gotten that memo until after she appeared. 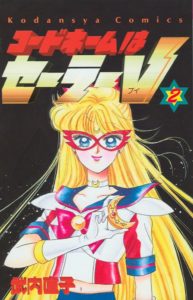 Back in the Sailor V universe, Minako was fighting all sorts of Youma as she thwarted the various evil plots of the Dark Agency — ostensibly a subsidiary or offshoot of the Dark Kingdom that still reported up to Queen Beryl. Yet neither Usagi, nor any other character in the series, ever mentions any strange monsters causing trouble or other mysterious occurrences in the Azabu-Juban area until after Jadeite and Morga appear. In fact, Naru’s friends write off her experience as nothing more than a dream when she describes what happened the night before.

Perhaps most telling, at least to me, is that the relationship only seems to go one way: Danburite seems to be aware of the Dark Kingdom and of the Four Kings (particularly Kunzite, as Danburite makes reference to him on several occasions) and Artemis is aware that he and Minako are just a small part of a much bigger story.

Sailor Moon‘s Dark Kingdom, however, seems to know nothing about Sailor V’s adventures and makes no effort to try to track her down in either of their efforts to find the Silver Crystal or in finding the Moon Princess — at least not until she appears as Sailor Venus.

So with all this in mind, what’s the conclusion?

Personally, I think that the Minako Aino that we see in Codename: Sailor V and in Sailor Moon are different characters with similar — though not the same — back stories. I would put the Sailor V somewhere on the same level of canon as I would the Sailor Moon movies with respect to the anime: they’re very close in terms of story and they overlap on a lot of details, but they simply cannot fit in continuity-wise.

I do think that Ms. Takeuchi originally did plan for the stories to overlap, though ultimately this became less and less possible as the Sailor V series continued and she kept writing new stories, making the relationship between the two universes too complex to easily fit together.

Or, at least that’s my assessment of the situation. Did I miss any crucial details? Anything else that should be considered when trying to put these stories together? Have a different opinion? Let me know what you think down below!

29 thoughts on “Is Codename: Sailor V a Canonical Prequel to Sailor Moon?”