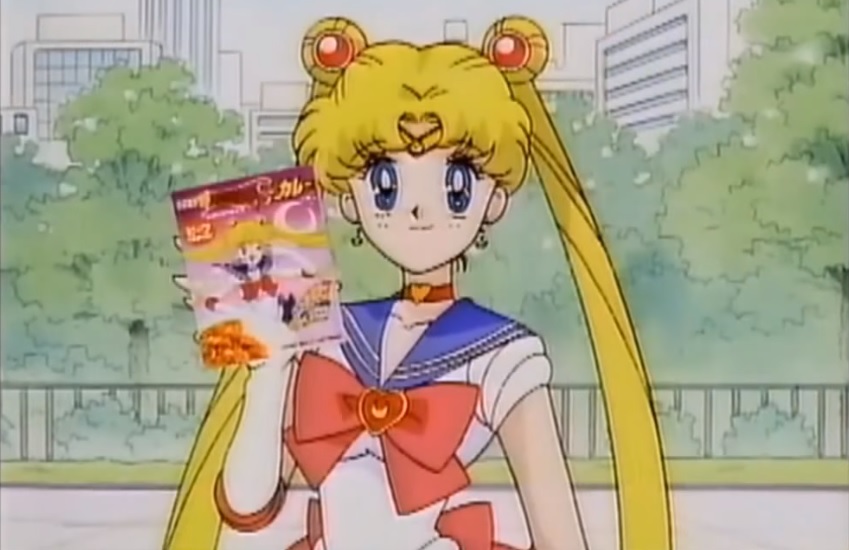 Long-time North American fans are probably already familiar with the infamous Sailor Moon Spaghetti O’s,1 but all the way across the Pacific, the Sailor Team were a common presence in the food aisle throughout the series’ run.

From curry to pancake mix, chocolate to corn soup, and sausages to candy, nearly no product was safe from the Sailor Moon brand.

Not like I’d want it to be, to be honest. As a child of the 80s, I’m a sucker for brightly colored cereals with my favorite cartoon characters plastered all over the box, so it really doesn’t take much to sell me on a product.

I’ve actually tried to get my hands on the Sailor Moon curry packs for quite some time, but apparently the sellers don’t want me to die by trying to eat 20 year old food and all seem to only be selling the boxes. How sad… 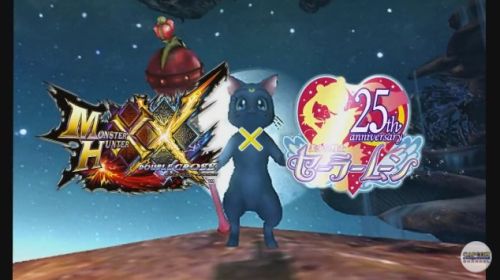 Luna dishes out the pain in Monster Hunter X

It’s not like I don’t believe that Sailor Moon and video games don’t mix — I actually love almost all of the games I’ve played. With the addition of a few wrestling moves to their skill set, the Sailor Team even fits pretty well into various action-based fighting games.

The whole Sailor Moon & Monster Hunter tie-up,2 however, just struck me as really bizarre. First off, there’s the question over why Luna is wielding the Cutie Moon Rod in the first place, seeing as how no one else really should be using it other than Sailor Moon herself.

Next up, there’s just something about seeing an iconic Sailor Moon item being used to club enemies to death. I mean, I get that they needed some kind of iconic item from the universe to add to the game for players to equip, but watching Usagi’s magical wand usually reserved for healing her enemies being turned essentially into a mace is… well… odd.

Finally, I know that they needed it to be a mascot character, and that Monster Hunter has a strong cat connection in the first place. But Luna? She’s not exactly what I’d call a berserker on the battlefield.

All abooooooooard the Sailor Moon Express 2

All Aboard the Sailor Moon Express

Though information on the trains is sadly rather sparse, as far as I’ve been able to tell,3 the Sailor Moon Express 2 was a normal train on the Seibu Shinjuku line that had a Sailor Moon placard on the front and various decorations and posters put up on the inside of the train. Out of the 50,000 contestant entrants, only 1,500 lucky young kids were able to ride this train of pure sailor bliss. 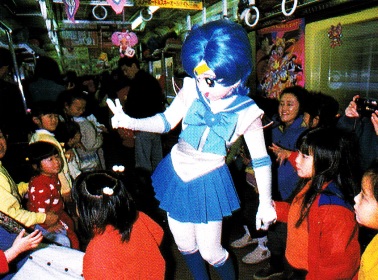 Departing from Seibu Shinjuku station at 9am on December 10, 1995, the lucky contest winners were treated to train conductor announcements made by none other than Usagi herself, and a 35 minute train ride joined by the Sailor Senshi themselves. 35 minutes later, they arrived at the Seibu Yuenchi theme park,4 where they got to take part in a Sailor Moon dress-up/singing “idol contest” and more.

The day ended with a performance by Pretty Cast’s Elena and Reo (of “Morning Moon de Aimashou” fame),5 followed by a stage show.

I just don’t get the need for Sailor Moon lingerie…

I was so close to writing about the Sailor Moon tampons. So close. But in a strange way, the product connection kinda makes as much sense as all the eye-liner, makeup, and other cosmetics do. Femininity, growing up, you know the rest.

Nope, I have to throw my vote in with the Sailor Moon & Peach John line of Sailor Senshi lingerie.

While I totally get what they were going for on the surface here — young girls who grew up with Sailor Moon are now adults, ostensibly in relationships, and they want to feel attractive — it feels like the series has somehow come full circle. The anime and manga were both pretty clear that the Sailor Soldiers were all wearing leotards under those sailor skirts, so it strikes me as really bizarre to actually see their uniforms turned into underwear. 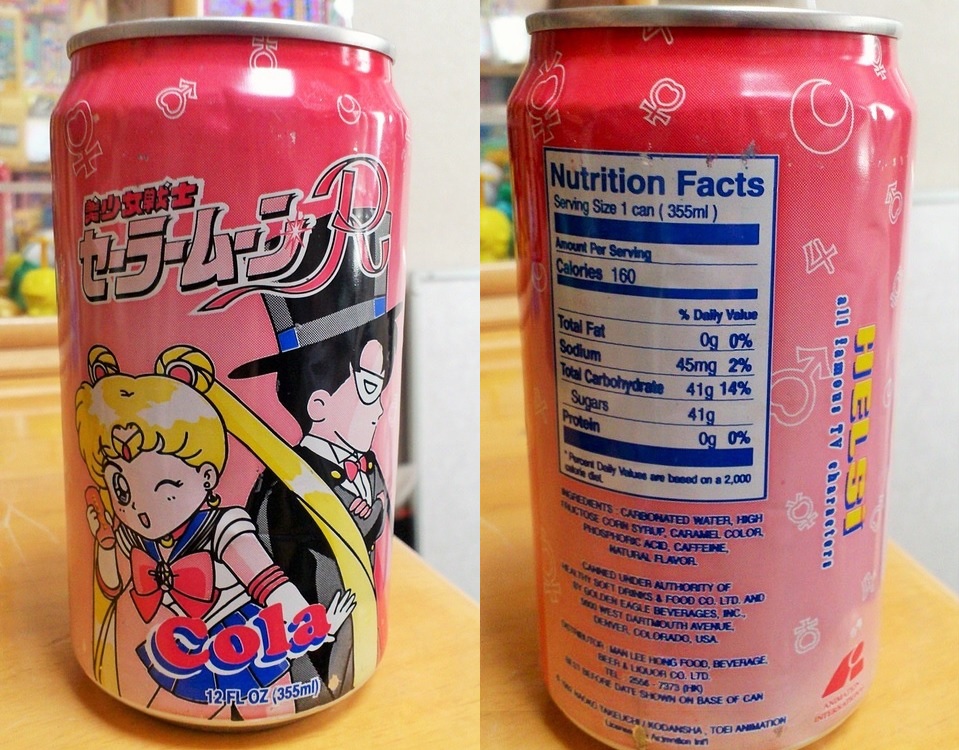 I know it kind of seems like cheating to mention food products twice here, but these mystery cans of Sailor Moon cola have been bothering me for years.

At first glance, they’re just cans of generic cans of soda with some Sailor Moon characters thrown on for good measure. No different than Pepsi’s 1999 Star Wars: The Phantom Menace promotional can tie-in,6 right?

Things get weird when you turn the can around, however, and notice that despite being marked with Japanese Sailor Moon R branding on the front, the product is marked with the familiar 1990s-era “Nutrition Facts” label as required by the United States’ Food and Drug Administration.7 In fact, you’ll probably also notice that everything on the back of the can is written entirely in English. 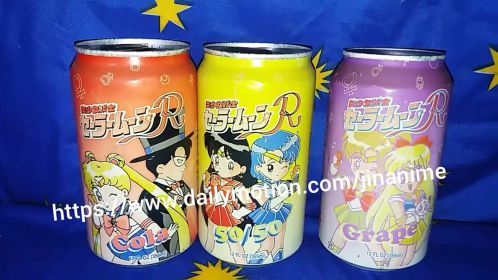 Apparently other Sailor Moon soda flavors were made, too

Not only is the labeling in English, but it turns out that the soda was canned by “Healthy Soft Drinks & Food Co., Ltd.” and “Golden Eagle Beverages Inc.” in Denver, Colorado. It looks like this was then later re-distributed by the Man Lee Hong Food, Beverage, Beer & Liquor Company Limited for sale in the Hong Kong market.

As far as I’ve been able to find, in addition to the Sailor Moon-branded ones, Crayon Shin-chan also appears to have shown up on soda cans as well, which makes sense. The side of the can is marked with “all famous TV characters,” so I’m guessing it was some sort of anime soda tie-in. But it’s still really strange when you think of three territories (Japan, USA, Hong Kong)8 being involved just for a soda can.

At risk of losing my Sailor Moon “street cred,” I actually love this bizarre, seemingly inconsequential stuff more than most of the products on the market. I love this sort of obscure, useless stuff that I even have a DiC-branded 1990s Sailor Mercury kids toothbrush that I brought with me all the way from the US to Japan. Yes, I’m weird.

So now that we’ve talked about my favorite Sailor Moon product tie-ins, why don’t you tell me about yours? I’d love to hear about what other weird stuff there is out there that I haven’t even seen yet!