The short answer is: probably not. A quick Google image search for senshi in Japanese1 pulls up a lot of characters in armor and wielding weapons. The job of “Fighter” in Final Fantasy 1 is known as Senshi,2 the “Four Heroes of Light” are the 光の四戦士 (Hikari no Yon Senshi),3 and even the Japanese write-up for the movie “300” describes them as coming from the 戦士の国スパルタ (senshi no kuni Sparta; Sparta, the land of warriors).4 Taking this together, it’s pretty clear that the Japanese interpret the word senshi as a type of warrior, fighter, or soldier and not as some sort of peaceful guardian. The original art books by Naoko Takeuchi are even titled “Pretty Soldier Sailor Moon” in English, so that puts the origins to rest, at least.5

So where does the Guardian title come from? The earliest reference to it that I could find is in the live-action series of the same name that debuted in 2003. The best theory I can come up with is either that this is due to wanting to make the concept friendlier for young girls or, possibly, it was to further distinguish it from the live action musicals which were running at the same time. The musicals almost always included the title written in English for stylistic reasons, so seeing as they were both live action, this may have been a factor. 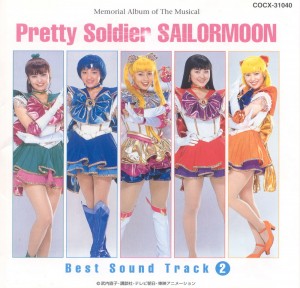 Whatever the reason for the change, it seems like it’s stuck for the franchise now and that the official English title is now Pretty Guardian Sailor Moon. We can at least say, without a doubt, that Scout6 isn’t a good translation. One thing that I would like to know, though, is how this nuance difference will be addressed when Viz finally gets around to their subtitling and dubbing of the final season, Sailor Moon Stars. The Starlights, Galaxia, and the Animamates are all senshi, which makes the title of Guardian a bit difficult. I guess I need to finally read Kodansha’s English translation of the manga7 and see!

6 thoughts on “Guardians? Soldiers? What Are the Sailor Senshi?”