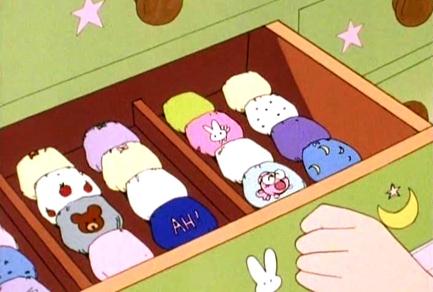 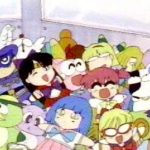 Gyopi and Wapiko next to Sailor Mars and Sailor V

We’ll start with the easy question first: this reappearing fish (goldfish, to be exact!) character is Gyopi, the animal mascot of sorts for the manga/anime series known as Goldfish Warning!1 The manga ran in Nakayoshi from February 1989 through June 1993 and, for the first year at least, the main characters — particularly Gyopi and Wapiko — often appeared together with Usagi in various promotional materials and even in several Nakayoshi-related games.

To the best of my knowledge, Nakayoshi had three games based on its properties: the Famicom RPG Nakayoshi to Issho,2 (lit. Together with Nakayoshi), the Super Famicom puzzle game Panic in Nakayoshi World,3 and the Gameboy mini-game collection Welcome Nakayoshi Park,4 which unfortunately it seems like Goldfish Warning! didn’t make the cut for.

While this would generally be enough of a reason to earn you a few appearances in Sailor Moon, what’s probably even more noteworthy about the series is that it also had an anime which ran on TV Asahi from January 12, 1991 to February 29, 1992.

For anyone who is by far better at calculating dates than I am, you’d note that these air dates are both Saturdays, meaning that, yes, Goldfish Warning! aired not only on the same day, but actually during the same time slot (7:00pm to 7:30pm) that Sailor Moon was to later occupy. In fact, the very first announcement of for the upcoming episode of Sailor Moon (which the series aired at the end of every episode) actually took place at the end of the last episode of Goldfish Warning! to let fans know that they should be on the lookout for a brand new show. 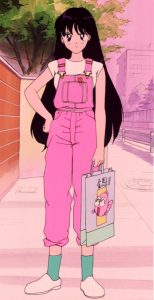 Since the target audiences for the two shows were most likely the same demographic and it’s a safe bet that the children who watched the exploits of Gyopi and Wapiko kept on watching Sailor Moon, it’s really no surprise that they’d throw in references here and there. What’s a little less obvious, though, is that most of the production staff of Goldfish Warning! (including director Junichi Sato and music composer Takanori Arisawa) actually moved on from their work on that series to immediately begin work on the Sailor Moon anime, which led to an interesting ad-lib homage to the series.

And there you have it! For something that, at first glance, just seems like a generic cutesy character design thrown in every once in awhile to add a little bit of Japanese kawaii to the scene, it actually turns out that the little fish here has a lot more back story that you’d assume! I wish I could say one way or another if the references in the Sailor Moon anime actually kept on going or started to go away as the series progressed (and as the animation staff slowly started to grow and gain new members), but with little references like this it’s really hard to keep an eye out in each and every scene.

All the same, it’s nice to see things like this! There are a few other references to other anime that I’ve been meaning to write about, but that’ll have to wait for another time. Of course, if you know of any, I’d love to hear about them!

5 thoughts on “Why Does a Fish Keep Appearing in Sailor Moon?”