For those of us first exposed to Sailor Moon through the DiC dub and familiar with the terminology there, learning that our beloved Crescent Moon Wand was actually known in Japan as the Moon Stick was… well… something of a let down. While I – and I’m sure many others – was enthusiastic to learn everything I could about the “pure, original” form of my favorite anime, the Moon Stick always rubbed me the wrong way. Unlike everything else in the series, it lacked that pizzazz a lot of Sailor Moon was known for.

So what happened? How did the Moon Stick come to be known by such a simple name? Today, we’re going to take a look at just that. 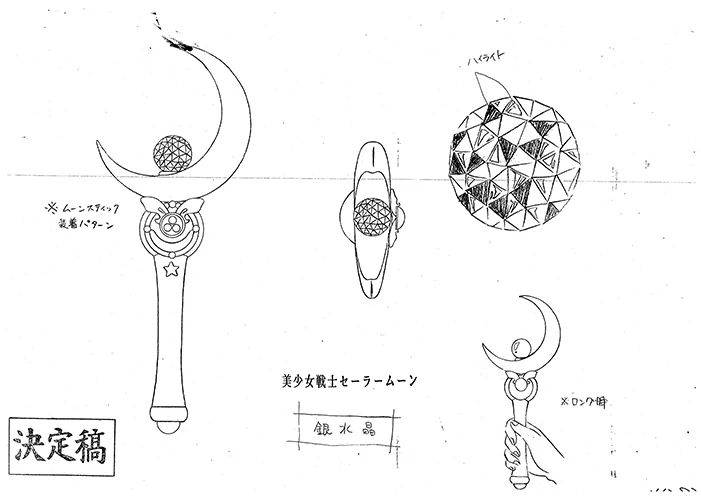 To the surprise of absolutely no one, a lot of the basis for Sailor Moon is related to historical precedent.

I know it’s popular to praise the series what began the fighting magical girl boom, that’s simply not true when you look back at other anime and manga that predate it. Though they may not have been quite the phenomenon that Sailor Moon was, there are quite a few shows that directly inspired the series.1

The magical items on display in the series are really no exception. And there’s how the infamous Moon Stick stuck, if you will. Yes, I love puns.

While this is by no means an exhaustive list, we’re going to take a look at some of the more famous sticks magical girls were using in the 80s and 90s to battle the forces of evil.

Though by no means the first, I think I’d be remiss if I didn’t mention right off the bat The Masked Belle Poitrine,2 a 1990 live-action tokusatsu show that Sailor Moon borrowed heavily from. As the series continued on, Yuko Murakami’s (Poitrine) younger sister, Momoko Murakami, joined her in the fight against evil as Poitrine Petite.

Among Poitrine Petite’s magical arsenal was the aptly-named “Stick,” which she used both to transform and as her weapon, the “Belle Saber.” It’s also definitely worth mentioning that Poitrine was produced by Toei, the same company behind Sailor Moon.

Another favorite stick wielder of the era would be everyone’s favorite Magical Princess Minky Momo,3 which ran on Japanese television from 1982 through 1983 and was kept alive through the 1980s in the form of OVAs. If you’re an old-school anime fan, you may recognize her as the titular Gigi of The Magical World of Gigi, as it was known in its heavily-edited form outside of Japan.

Momo used her “Minky Stick” to transform into an adult – well, 18 year old – version of herself and transform into a variety of costumes, not much unlike Usagi’s Disguise Pen or Minako’s Crescent Compact. Her transformation scene, with all the gymnastics ribbons and moving around, is definitely reminiscent of the Sailor Moon transformation sequences.

Another important stick enthusiast is Creamy Mami of the 1983-1984 anime hit, Creamy Mami, the Magical Angel.4 Armed with her “Creamy Stick,”5 which was kept hidden away in her locket until she needed it, 10-year-old Yu Morisawa – the main character of the series – could transform into the 16-year-old idol, Creamy Mami. She was also able to use the various spells together with the Creamy Stick to perform other types of magic.

I could go on and on with various other characters and their respective sticks, such as:

And that’s just those that pre-date the Sailor Moon series. Don’t get my started on Saint Tail and the Illusion Wand or other examples.

So why did I just bore you to death with a history lesson behind famous Sticks in Japanese children’s media? Well, like many of the other things we discuss, it helps to get a look not just at Sailor Moon as a series, but at the times in which the series existed.

Looking at it from the point of view of a native English speaker, the name comes off as pretty dull and rather uncreative. But when you look at what many of the magic wands were referred to at the time, and particularly among series which seemed to have a strong influence on Sailor Moon, it was simply a normal name to use.

Personally, while I’m not much of a fan of the name, I have to say that the Moon Stick is my favorite of all of various rods Sailor Moon wields as the series progresses. Maybe it’s just nostalgia, but I love how it later combines with the Silver Crystal. But what about you? What’s your favorite of the moon wands, and why?

11 thoughts on “Where Did the Moon Stick Get its Name?”