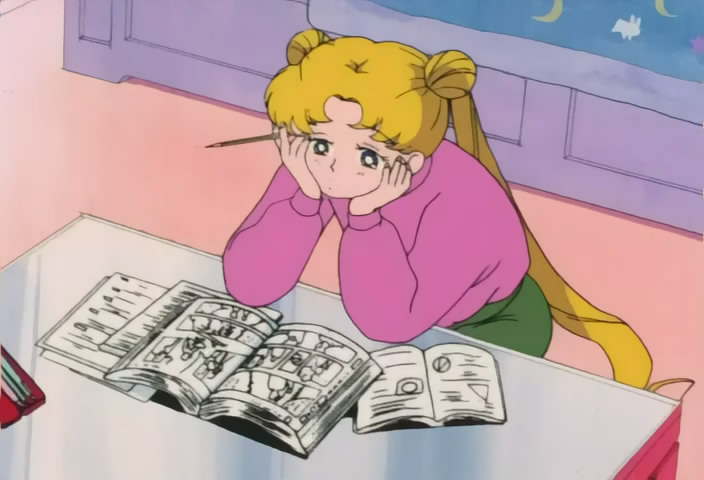 So what kind of entertainment does Usagi like to read?

Well, it should come as no surprise that, as we will soon see, she seems to like the exact same type of magazines that she appeared in – shojo manga like Nakayoshi and its sister magazine Run Run.

In episode 8 of the anime, for example, we see Usagi reading a magazine titled “Girls,” a so-called “Fashionable Comic.” It promised 8 goods/includes together with the magazine, which is something that Nakayoshi was famous for at the time, making this probably a subtle hint toward the magazine. What’s more, it’s priced the same as Nakayoshi, at 390 yen.

In case you weren’t get sold on the Nakayoshi theory, don’t worry, I’m not done.

On the back cover of this magazine, you can even see an advertisement for “Yoshiko from Moon Pen.” In case you thought that was just a silly advertisement, I don’t blame you. But this is actually a reference to a Japanese calligraphy/penmanship distance-learning course, often advertised to – you guessed it – kids, and specifically readers of Nakayoshi.

The school is called the Nihon Pen Shuuji Kenkyuukai (日本ペン習字研究会), or Nippen for short. They ran a promotional comic called “Yoshiko from Nippen”3 to help advertise their product. Since the character ni (日; sun) used in Nihon (日本; Japan), it was an obvious switch to change this to Moon for the wordplay.

Obviously Usagi isn’t much of a calligraphy snob, so I think it’s safe to say that the advertisement had little effect on her.

We next pick up with Usagi’s voracious appetite for high literature in episode 17, where we see her reading “Young Nakayoshikoyoshi,” likely a play on both the Young Jump and Nakayoshi. The magazine sports an advertisement for the Sailor V game and a special feature about the up-and-coming photographer and character of the day, Kijin Shinogawa.

For all none of you that are interested in a bit of trivia, Kijin Shinogawa here is most likely a reference to Kishin Shinoyama, a famous Japanese photographer.4

Shinoyama has put out a large number of books of photographs of girls, dressed, mostly undressed, and nude. 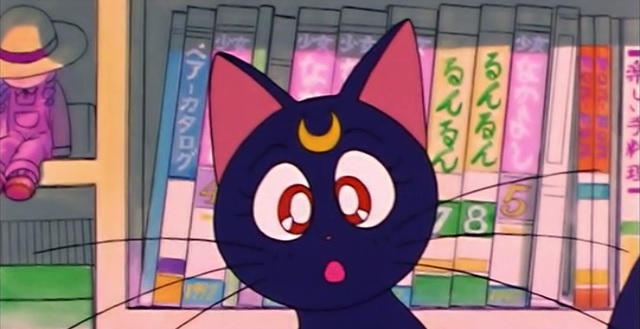 Moving on in Usagi’s attempts to expand her literary horizons, episode 19 gives us a good look at her bookshelf where we can see some of the books she was keeping up with… and by books, of course I mean mostly manga.

Here we can see 5 issues of a magazine Shojo Nakayoshi, only a slight modification of name of the magazine that carried Sailor Moon as well as RunRun, which didn’t even try to pretend to not be Nakayoshi’s sister magazine which carried Codename: Sailor V. There’s a slight discrepancy here in that Nakayoshi had become a bi-monthly magazine from July of 1992 and Usagi owns July and August, but let’s not get too pedantic here.

Besides, the episode was probably drawn before the announcement, anyway.

Other books you can see on Usagi’s shelf are “Bear Catalog,” “Pom-Pom,” and “Fun Homemade Cooking.” While the first two leave me for a bit of a loss, the last one is pretty interesting, since I wouldn’t generally think of Usagi as one with an interest in the culinary arts.

With all that said, I think it’s probably worth mentioning that it’s probably inaccurate to describe Usagi as someone who doesn’t like reading. I know it seems like a small difference, but I know many people out there who are much more visual and simply do not enjoy having to read at all. Period. Or “full-stop” for my non-US readers.

In fact, Usagi discusses this with Ami in episode 9. She doesn’t like having to read anything that’s all words, meaning dense text, so it’s actually probably that our downtrodden here might be totally find reading cookbooks and other light reading when broken up with eye catching images – and not just manga.

I can’t say one way or another if this new information will somehow make your life richer or more meaningful, but it is kinda fun to have a more fuller idea of what kind of books Usagi is reading when she’s slacking off from her studies. At some point, I should probably talk about her love for video games… but that’s another story for another time.

It must sound like I’m beating a dead horse, but I really do think that Usagi is much more intelligent that the series gives her credit for. She may be lazy, but her biggest flaw is that she has the misfortune of being surrounded by massively intelligent people. Of course, I’d love to hear your thoughts on the subject!

One thought on “What Kind of Magazines Does Usagi Read?”