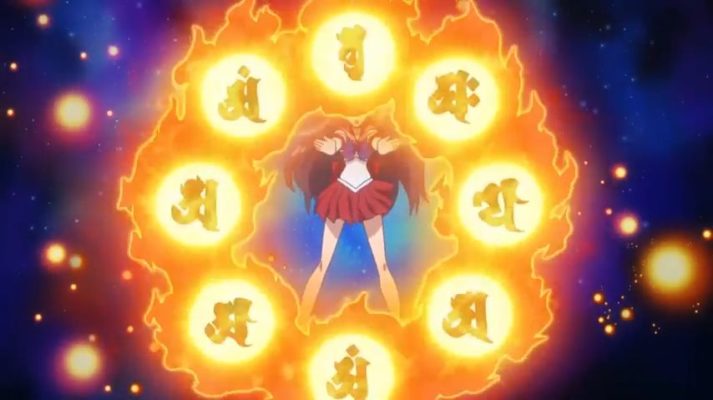 While Sailor Moon definitely had its fair share of character stereotypes, I think that was actually one of the points where the series truly shined. Rather than just sticking with common tropes, it built upon them to make each of the characters into people that stood out on their own merits and that the readers/viewers could really relate to.

One such character, for me at least, is Rei — and especially the Rei that we see depicted in the anime. Though a haughty, strong-headed, and competitive 14 year old girl in her day-to-day life, she somehow manages to make this work with her spiritual side without ever feeling like either depiction of the character is shoehorned in.

Today, I’d like to take a moment to explore a little more of Rei’s spiritual side, and specifically about what some of her chants actually mean. If you happen to be an evil demon, you may want to skip this article. For the rest of you, read on! 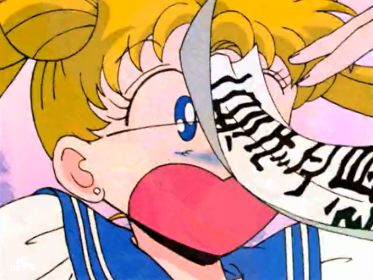 You could probably make a pretty good argument that Rei’s spiritual side makes a lot more sense in the manga, where she’s depicted as a cool, calm, and collected character. You could then probably push that argument further and say that Rei’s duality can come off as forced in the anime due how they rewrote her character.

And you’d be entirely right.

However, while the manga certainly set the stage for Rei’s life as a Shinto priestess at the Hikawa shrine, Ms. Takeuchi doesn’t really go too far beyond that. Most of what we see of Rei’s shrine life actually comes from the anime. That doesn’t make either depiction better than the other, of course, but it is worth keeping in mind when discussing the merits of the various Rei’s in Sailor Moon!

Now that we’ve got all that out of the way, I suppose we should finally get to our subject at hand: Rei’s chanting!

Though by no means a prerequisite for Rei to throw an ofuda at her foes, the chanting typically comes into play Sailor Mars is using her demon-banishing charms as an attack. In fact, I can’t recall any scenes where she recites this mantra outside of her Sailor Soldier form,1 though the opposite is true, and there are a few cases where Sailor Mars deviates from the standard chant.

And what is that standard chant, you ask?

Known is 九字[切り] (kuji[-kiri]; nine symbolic cuts),2 these are a variety of mantras that consist of nine syllables. Interestingly enough, the practice of reciting these nine-syllable mantras actually originated in Taoism, though it later gained a foothold in Shugendo,3 a Japanese ascetic religion that blends both Shinto and Buddhist traditions. This is not the first, nor last, time that Rei was religiously confused. Poor girl!

There are also mudra (hand postures, or ritual gestures)4 to accompany each of the nine “cuts” made while chanting the mantra. The meanings of each of the mudra have no correlation to the Japanese words chanted in the mantra, or at least scholars haven’t been able to find any connection at this time. 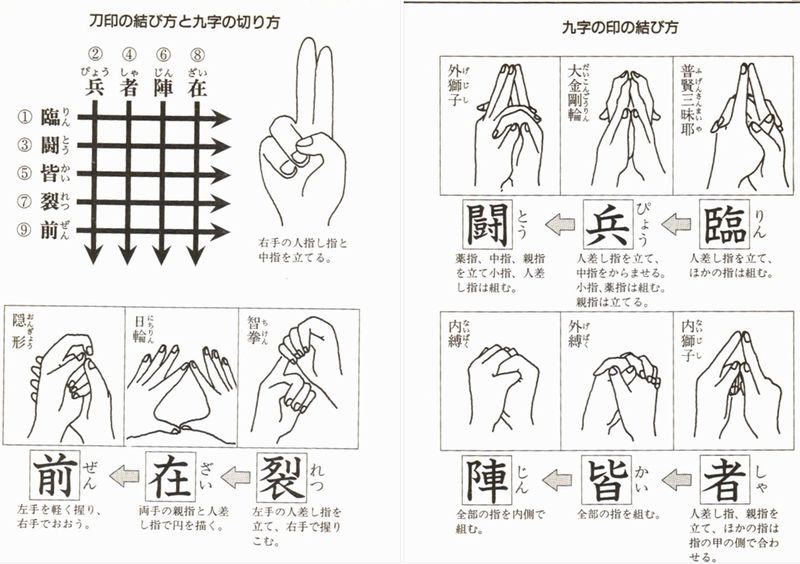 In Shinto, the characters have the following meanings:5

What this essentially means is that the forces of the universe (all people) are united together in the fight against evil. The act of performing the mantra is meant to bring good luck to the practitioner, and it also used in purification rituals.

Fortunately for us desperately in need of purification, (most?) Shinto rituals tend to prefer using water to purify people rather than burning the afflicted person alive, which is Rei’s method of choice. 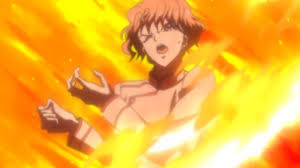 As an interesting bit of trivia, Michie Tomizawa,6 Rei’s voice actress in the 90’s anime, mispronounced the sixth character (陣; jin) as chin during the first half of the first season. While some astute fans (correctly) point out that chin is also a valid reading,7 she and the anime producers likely also viewed this as a mistake, considering that her pronunciation of the character changed to jin later in the series.

I hope you found this as interesting as I did and, just maybe, are inspired to learn a bit more about Shinto and Japanese traditions! As silly as it may sound to admit, Sailor Moon is nearly entirely responsible for inspiring me to pursue a degree in Japanese history, and I love being able to find little things in the series that tie back to the culture. Has the series ever inspired you in such a way? I’d love to hear other people’s stories!

15 thoughts on “What Does Rei’s Akuryo Taisan Chant Mean?”