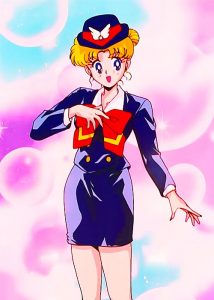 That’s certainly one way to fly…

As with the other Sailor Soldiers, you can see in Ms. Takeuchi’s original concept art1 that some of the items Usagi was supposed to use in her fight against evil got either reworked or thrown out altogether as the series was finally put into production.

Of course, it’s a bit difficult to say which of these powers were actually “cut” when you get down into the particulars when you consider that just because something wasn’t used doesn’t necessarily mean that an attack, power, or item is no longer a valid part of the series (provided that it doesn’t conflict with something else in the universe). For example, if a character is never named in a movie but their name appears in the credits, we can assume the name is still correct.

So what are these additional items / attacks that Ms. Takeuchi had planned?

While this stuff is all pretty interesting, much of what’s written here could actually still be completely true within the series (well, the manga at least) and just wasn’t actually used “on screen,” so-to-speak. I do like the fact that Sailor Moon was given a lot more attacks, though, and seems to have been originally intended to be a far more able fighter, much like Sailor V. I’m not sure how well bombs would fit the theme of the series, but I suppose that’s another issue all together! 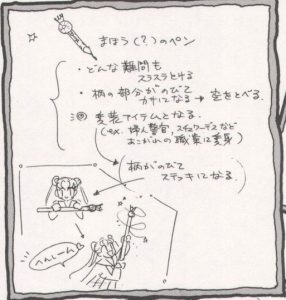 But what interests me most of all – and is the entire point behind this article – is this: Sailor Moon’s “Magic (?) Pen.”

I’m not exactly sure why there’s a question mark, to be honest, since it is pretty clear from all the other items and attacks that Ms. Takeuchi has laid out that Sailor Moon is a world with magic in it, but that’s neither here nor there.

Of note, though, is that originally Usagi was meant to have a transformation pen, just like the other Sailor Soldiers, though her notes conflict over whether this pen was used for her transformation or not.2

We can see that Ms. Takeuchi also intended for the pen to be able to answer any problem with ease, which probably is an ability Usagi wishes she had in the actual series. It also served the same function as what would later become the Disguise Pen, so I guess the idea wasn’t entirely scrapped. It also seems that the pen was meant to grow (somewhat akin to the Sealing Wand in Card Captor Sakura?)3 and be used as her staff, possibly in place of the Moon Stick?

Last, but not least, is that apparently the top portion of her pen was meant to stretch out and expand into a giant parasol, with which Usagi was meant to be able to fly / glide. Considering how the world of Sailor Moon would up turning out to be, I’m incredibly curious just how different the series would have been with Sailor Moon being able to glide around on a parasol, or if this was just a one-off scene.

See? They CAN fly!

There are always a lot of new things to discover when you take a look back through Ms. Takeuchi’s original concept materials. While I absolutely love the way the world and characters of Sailor Moon turned out, I have to admit that I do sometimes wish that we could have seen more of this alternate universe version and just how different the story would have would up being. I wonder what kind of adventures awaited these alternate Sailor Soldiers?

17 thoughts on “Was Sailor Moon Originally Meant to Be Able to Fly?”