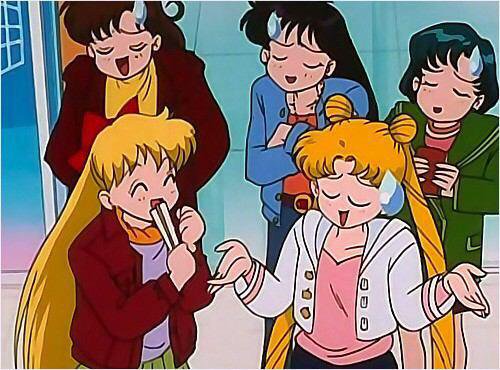 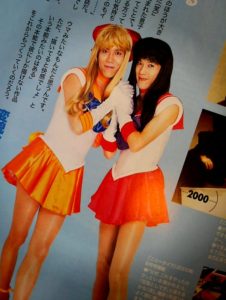 The scene we’re talking about today is from the first episode of Sailor Moon S (episode 90 of the series).

Early in the episode, we learn that Usagi — to the surprise of absolutely no one — did not do well on her English test. Okay, “not well” is probably a bit too charitable. 5/100 is a pretty atrocious score, even by Usagi standards.

But hey, this isn’t really a surprise for anyone. I mean, even Ikuko has to get tired of yelling at Usagi about her grades at some point, right? Clearly it’s not working.

So! Why am I rambling about this stupid test?

Well, because despite it being a quick gag flashed on the screen for only a second, what’s written on the page is actually pretty interesting.

Before we start, though, I wanna say good on ya, Ms. Sakurada, for taking the time to write to your students in English. In fact, the English and Japanese even match up. Nice touch!

As a fun note, on the left side of the paper there are two questions to write the Japanese equivalent of English words, to which Usagi answers “I have no idea” (分かりません) and “I’m sorry!” (ごめんなさい！). The first one was “bubble.” I bet Ami got that one!

Anyway, we can see Question 6 here, where Usagi is supposed to provide the Japanese word for (1) and fill in the blank for (2). The significance of all this is that it makes out for a pretty hilarious story about what can only be a reference to Director Kunihiko Ikuhara,1 and something I’m pretty sure he wouldn’t readily sign off on if he knew about it.

It looks like they threw a bunch of Japanese slang in here, so let’s explain.

Nanpa (often written as nampa) means to hit on someone, and is sometimes referred to as “girl hunting” — as if that isn’t creepy.2  Though it could be directed at a specific individual (like hitting on a woman at a bar), it often has a connotation of standing around in busy areas and hitting on women as they come past, asking for a date, etc.

So Mr. Ikuhara, is exhausted after a long day of work and goes off to look for a charming woman, any woman, to help ease his heavy heart.

In case you’re curious what this “apply for comfort” is all about — get your head out of the gutter. Odds are, the author meant 癒しを求める (iyashi wo motomeru), or to seek comfort in. When you translate a lot, you need to get good at backwards translating bad English to Japanese and then back to English.

Alas, our hapless hero finds out that the young woman receptive to his advances is actually a new-half,3 a Japanese word for men who portray themselves as women. Transsexual would probably be the closest corresponding word in the west, but the nuance and culture is a little bit different.

How this situation ends is left up to the viewer to imagine, but the last thing we can see on the page is “No!”, so I’m not holding out hope that it ended well.

Anyway! I guess this quick flash on the screen may not be of too much interest to many of you out there, but I live for this kind of stuff. As a young child, I remember watching to the end of every Tiny Toons and Animaniacs episode just to spot the gag credits4 they inserted.

I know opinions of Director Ikuhara are pretty across the board, from adoration to absolutely hating the guy, but unfortunately I don’t really feel strongly one way or another. But what about you? Do you think he built up on Ms. Takeuchi’s vision, or did he hamper its progress?

10 thoughts on “What Joke Did the Anime Staff Sneak in About Director Ikuhara?”