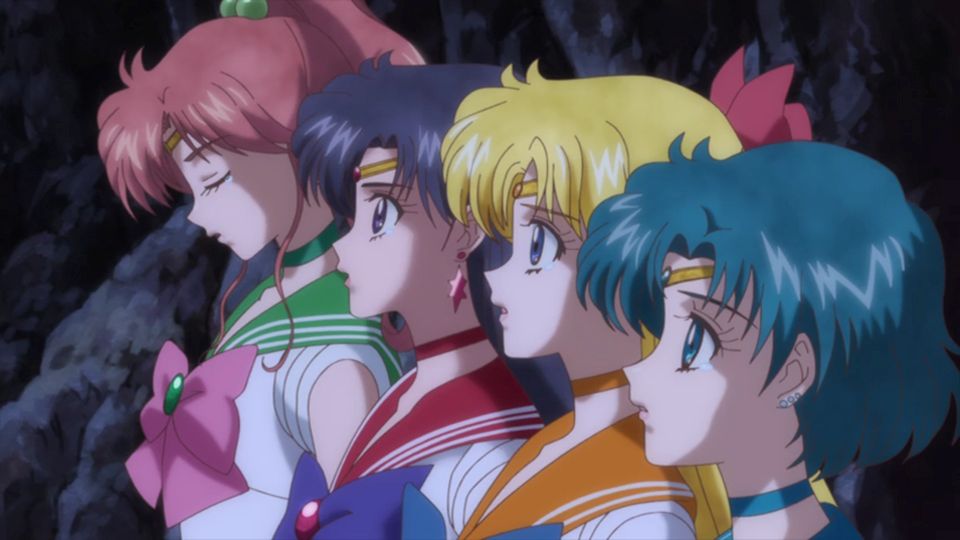 A battle awaits… just like yesterday. And the day before…

As a person who grew up with Power Rangers, I will unashamedly admit that I absolutely love the Monsters of the Day (MotD) that are so prevalent in the Super Sentai series – and thus, by extension, Sailor Moon as well.

So in honor of our favorite Moon Power fodder, we’re going to take a look at where the names for each of these groups came from. After all, just what the heck is a lemure anyway?

Stick around to find out! 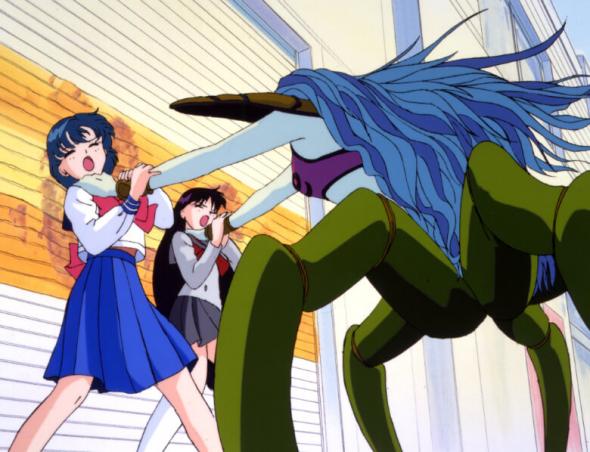 Not an MotD, but still not to be trifled with

Though these MotD were still a part of the manga, the anime really ran with the idea and made sure to properly implement these one-shot villains into nearly every episode of the show.

Obviously opinions are pretty split on their use, ranging from being a total waste of time and padding the show, to being a fun addition that helped showcase what the Sailor Soldiers were capable of doing.

Myself, I’m probably in the latter camp – I appreciate that each episode was given a theme to it, and that theme typically carried over into the monster. Some of the theming was pretty generic, sure, as was the case with the tennis-inspired youma Tesuni or questionably-designed Hurdler, a daimon that was essentially a giant running shoe. 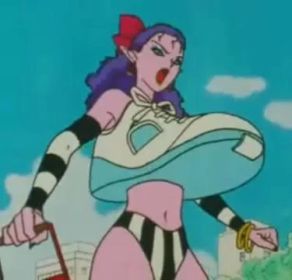 Hurdler leaves something to be desired

But for every design that leaves you comically smacking your head (do people actually do that?), there are some truly interesting references, like Kunzite’s Oniwabandana – named after the Tokugawa-era government spies, Oniwaban – and the twin droids Chiral & Achiral – which take a page from Ms. Takeuchi’s extensive background in chemistry.

But something tells me that you’re not here to read an extensive love letter to Sailor Moon‘s MotD.

Before we take a look at where the name for each season’s enemies come from, there is one extra little tidbit that I’d like to share: the Japanese name used for MotD. 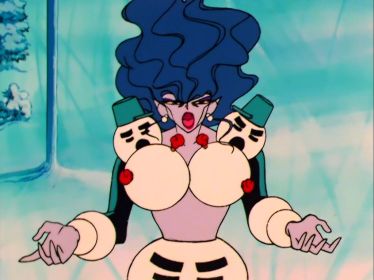 The enemy designs were not always subtle

In Japanese, these enemies are referred to by the slightly less descriptive – yet possibly more interesting – word zako (雑魚; small fish/small fry).1 I honestly think it fits absolutely perfectly, since it so succinctly gets across their role in the anime, which is basically to fall at the hands of the Sailor Soldiers with little real challenge. Like a school of fish, their only real strength is in numbers.

With all the background out of the way, we’re now ready to take a deeper look at the subject at hand. So let’s start!

These are probably the quintessential MotD that come to mind when people think of villains in the Sailor Moon universe. They’re name is also one of the most generic, at least from the point of view of a Japanese viewer, in that the word youma (妖魔) simply means “ghost” or “apparition.”2 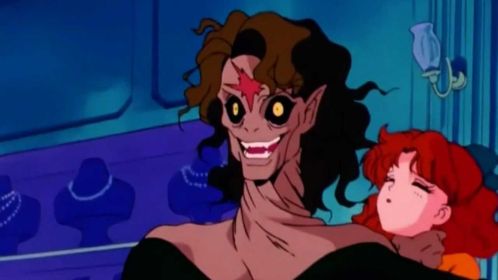 That definitely doesn’t rule out Morga

That said, I don’t think that Ms. Takeuchi just pulled the word out of a dictionary and decided to go with that.

It’s probably more likely that this name was chosen due to Sailor Moon‘s connection with the Super Sentai series, and more specifically Sekai Ninja Sen Jiraiya (世界忍者戦ジライヤ; World Ninja War Jiraiya),3 the series that ran on TV Asahi for the 1988-1989 season. The main antagonists of the story were the 妖魔一族 (youma ichizoku; the Youma Clan), which may have been where the name came from. 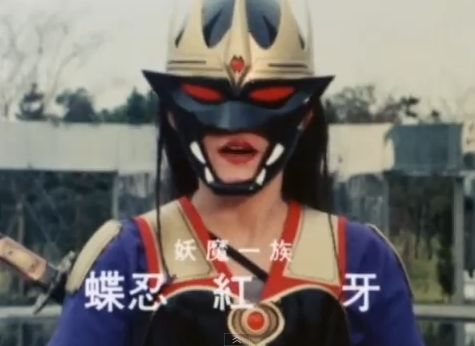 A member of the Youma Clan

Another possible explanation for the name is the anime titled Brave Raideen (勇者ライディーン),4 which also aired on TV Asahi in 1975-1976, and featured an enemy known as 妖魔帝国 (youma teikoku; the Youma Empire). In each episode, they sent down a different monster, known as a 化石獣 (kasekijuu; fossil beast), to fight our heroes.

In any case, it is a normal Japanese word, but not something you’d typically encounter, so worth considering possible references!

I’m sure 90% of those of you reading this are already convinced that you know the answer – this is obviously a reference to the 1985 smash-hit cartoon Star Wars: Droids that followed the misadventures of R2-D2 and C-3PO.5 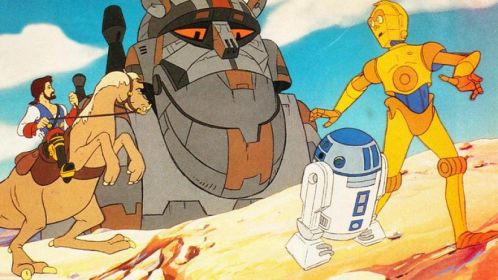 These are not the droids you’re looking for…

And you’d be wrong on both counts: the show was not a smash-hit, nor is it the reference you’re looking for.6

Throughout the 60s and 70s in Japan, there were a huge number of tokusatsu shows and movies7 which featured androids – in fact, I count 9 on a cursory glance.8 This is probably due to the fact that it’s easier to fit a guy into a cardboard suit and call him a robot than make something bulkier, but let’s not think about it too much. 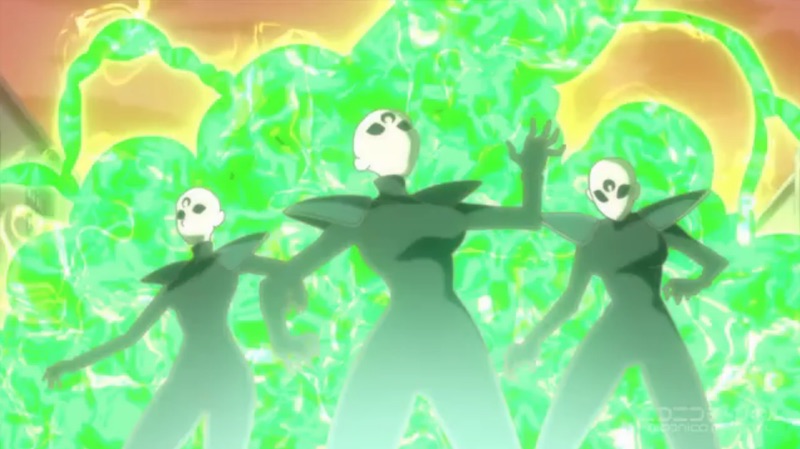 The manga/Crystal Droids were pretty generic

As for why she shortened it down to “Droid”? Probably to make it less of a dictionary word, though there are theories out there that Ms. Takeuchi cut off the front (top/head) of the word as a representation that the Droids themselves don’t have heads. Umm… yes.

The word used in the third arc of Sailor Moon, of course, comes from the ancient Greek daimōn, which is a “lesser god” or “guiding spirit” in ancient Greek mythology.9

While that information would be interesting in its own right, it’s also worth noting that the Middle English word “demon” traces its roots back to the Latin “daemon” (meaning “spirit”), which itself is a borrowing from the Greek “daimōn.”10 And this isn’t just your average, run-of-the-mill demon. We’re talking about ranging from “god of the heathen” to “unclean spirits” here. 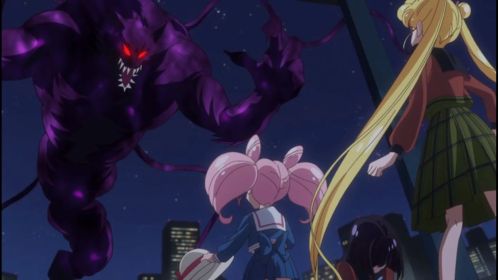 I’d be willing to call this a “demon”

So depending on how deep you want to look into this, Sailor Moon – the Messiah – was fighting against demons in the Infinity arc. Possibly even a further connection between the play on Christianity we got in that story arc?

Though the lemures in Sailor Moon don’t seem to have a lot to do with their namesake in Roman mythology, it is clear that this is where the name came from. The lemures are described as:11

[R]epresent[ing] the wandering and vengeful spirits of those not afforded proper burial, funeral rites or affectionate cult by the living[.] … [They] were formless and liminal, associated with darkness and its dread.

Basically, lemures are not something you’d want to bump into in a dark alley on the way home at night. 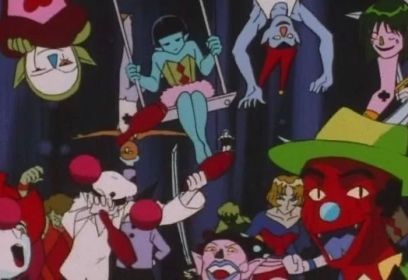 As much as I’d like to say that there’s some sort of deeper meaning to be had here, sadly I think the word was just kind of used for how it sounded and that it did, at least to some extent, have some sort of symbolic meaning behind it.

While I went into this fully expecting to learn about some sort of monster, ghost, or demon from a long-since-passed religion, I was quite surprised to learn that the word “phage” actually comes from bacteriophage, meaning:12

[A] virus that infects and replicates within a bacterium. The term was derived from “bacteria” and the Greek: φαγεῖν (phagein), “to devour”.

As for why this word was chosen, that’s a really good question. My best guess is that this was in reference to the phages essentially taking over their host (the now starseed-less person) and, unless Sailor Moon healed them, they would be stuck as Sailor What’s-His-Name and never turn back to their normal selves.

To be fair, though, phages only existed in the Sailor Moon Sailor Stars anime, and that season was pretty… bizarre as it is, so I’m not too surprised to see a departure from the demonic theming. 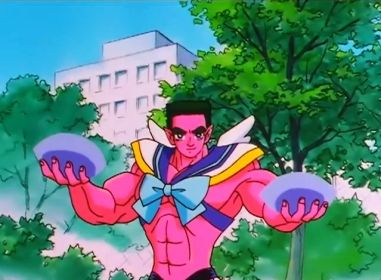 You can’t talk about Phages without mentioning Sailor Guts!

And there you have it! The sources for all of the names of the various Monster of the Day groups that appeared in Sailor Moon!

I know, deep inside, that they’re all essentially the same and a rehash of the same idea, but for some reason I’ve always found myself to be more partial to the Youma and Daimon due to how they interacted with the Dark Kingdom and Death Busters respectively. But what about you, which was your favorite group of minions?? Did you think any one of them did it better than the rest?

12 thoughts on “What Do Youma, Droid, Daimon, Lemure, and Phage Refer To?”