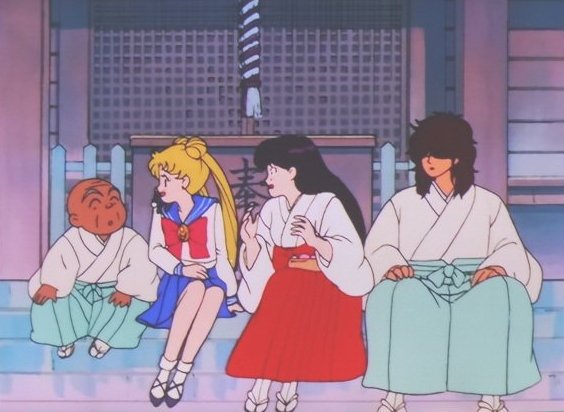 You’ve got some ‘splaining to do, Grandpa Hino!

With how many articles I end up writing about Rei Hino, you’d think I should have named this blog Sailor Un-Mars’ed. But to be fair, it’s not entirely my fault that between the anime and manga, there are so many riddles about this Christian school-attending Shinto priestess who suffers from split personalities.

Today I’d like to take a look at trying to unravel the mysteries of Rei’s family tree and, specifically, which side Rei’s grandfather lands on.

I hope you join along, it’s going to be an interesting ride! 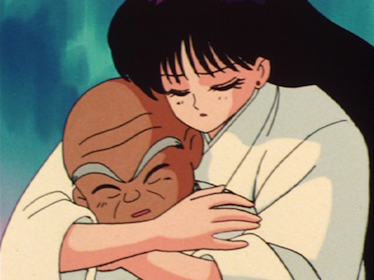 Goodbye Anime Grandpa! We’re not talking about you today.

It probably goes without saying, but Rei’s grandfather acts totally differently in the anime and manga, to the extent that I would simply consider them different characters and chalk this one up to another example of how the anime and manga are not always complementary universes.

The anime also doesn’t really bother to address Rei’s parents pretty much at all, as far as I recall, so we won’t be able to look to the anime for any help on this one. Nope, today we’ll be breaking out our copies of the manga and doing a thorough reading to try to suss out the details.

First off, the obvious information!

Further, we know that Rei’s grandfather is from her mother’s side,2 so…

…wait, what? We already know that he’s Rei’s maternal grandfather, and yet I’m still writing this article asking that question??

We’re explicitly told in the Black Moon arc that Rei is living with the grandfather on her mother’s side. But the information that we’re given later in the series, specifically in the Casablanca Memory side-story, makes the story far more convoluted.

Casablanca Memory doesn’t directly touch on which side Rei’s grandfather is on — in fact, the language he uses to refer to both of her parents is neutral and non-familiar, referring to her father and mother as 父親 (chichioya; father) and 母親 (hahaoya; mother) respectively — it does give us more information about Rei’s father.

Specifically, the story tells us that her father is also named Hino.3

“I think that’s the daughter of Statesman Hino, from the Democratic Liberal Party.”

As an interesting aside, the party that Mr. Hino apparently belongs to, the Democratic Liberal Party, was a short-lived political party in Japan that existed from 1948 to 1950.4 The party survived on through a merger as the Liberal Party,5 before dissolving again in 1955 in another merger to become the Liberal Democratic Party,6 which has been the ruling party of Japan nearly non-stop ever since.

So basically, Ms. Takeuchi probably just chose a now-defunct name of the ruling political party in Japan in order to avoid any direct political connections. Adding a party name at all was entirely unnecessary to the sentence in Japanese, but that’s neither here nor there.

Back to the subject at hand, the remark made in the Rain Tree restaurant explicitly states that her father is also named Hino. That, unfortunately, makes everything complicated. A maternal grandfather and father should generally not have the same last name, unless by some odd twist of fate her mother and father were both unrelated and had the same last name. 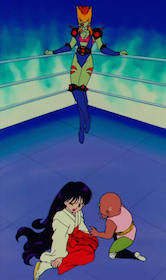 The undeniable bond between Rei and Grandpa

Another possibility is that we have to assume that one of these three conflicting facts — i.e., that (1) it’s her maternal grandfather, (2) that he’s named Hino, and (3) that her father is named Hino — is incorrect. While this is very likely the case and it’s simply an oversight, much like the strange issue with Ami and her mother keeping the Mizuno name after divorce, I like to avoid that explanation to the extent possible, since then you start cherry-picking which information in the series best supports your theories.

And fortunately for us, we actually do have another theory that could neatly explain everything away.

While Japanese law requires newlyweds to take on one of their respective family names upon getting married,7 there’s no rule over which name they take. Though still very uncommon even nowadays, with only a paltry 4% of couples choosing to take the wife’s family name after marriage,8 it’s entirely possible for the husband to essentially become a member of his wife’s family.

There are a myriad of reasons why this would be the case, though we have no information here so I can’t even begin to speculate.

Since Rei never mentions any aunts or uncles, it’s entirely possible that the family line would have ended with her grandfather and there would be no one to pass the priestly duties down to, so Rei’s father agreed to join their family. 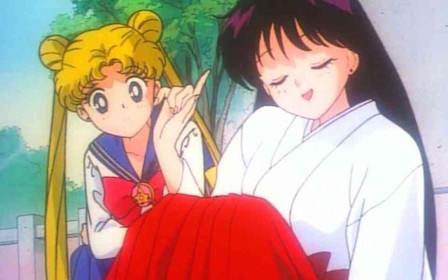 No more questions about me, Usagi!

And that about sums it up! Considering all the negativity Rei seems to express toward men, and the fact that it’s directly stated in the Black Moon arc, I think it’s safe to say that Rei’s grandfather is definitely on her mother’s side. The issues with the names could be easily resolved by either assuming that Act 3 was incorrect and that Rei’s grandfather is not named Hino, or that Casablanca Memory is wrong and Rei’s father has a different last name.

The latter option is incredibly unlikely, because her parents would have had to divorce prior to her mother’s death in order for her maternal grandfather to have custody of her, and that seems like it would have been an important part of the story.

So what do you think happened, was this just an oversight by Ms. Takeuchi, or maybe there’s some other way this could have all come to happen? I’d be interested in hearing about it, especially if the live-action PGSM could shed any extra light on the story!

22 thoughts on “Is Rei’s Grandfather From Her Mother or Father’s Side?”