Well, it’s just about time for the debut of the 2016 Sailor Moon Crystal cafe at Anion Station from April 4, 2016 (Mon.) through May 9, 2016 (Mon.). I’ve already made plans to go later this week and am really looking forward to it, but after staring at the menu for awhile and planning what I want to get, I realized that there aren’t really any English resources for fans living abroad and, to make things worse, the menu is all one image online so you can’t even enter it into Google Translate or some other automated translation program to get an idea of what’s going on.

This may or may not be of any interest to anyone, but for anyone who’s curious what flavor a drink inspired by your favorite Sailor Soldier ends up being, this might be helpful! So, without further ado… 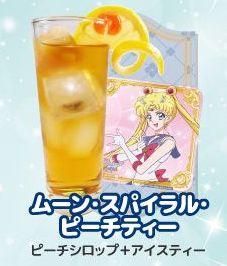 Iced tea with peach syrup in it, and what looks like a slice of lemon and a cherry on the rim, to give it the look of Sailor Moon’s odango and hair ornaments. 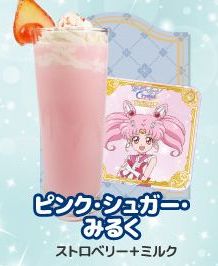 We finally get the debut of Sailor ChibiMoon, and with her we get this sugary-sweet concoction consisting of strawberry syrup and milk, with a strawberry on top and some nice sprinkles on the whip cream to top it off. 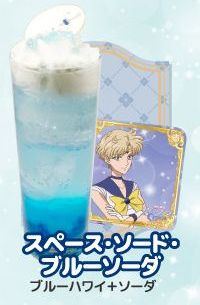 The flavor here of the Sailor Uranus-inspired drink is described as “blue hawaii and soda,” though this may be a bit ambiguous for anyone who hasn’t lived in Japan. “Blue Hawaii” is a common flavor for kagigoori (かき氷; shaved ice) that tastes like a typical punch, with just a hint of coconut.1 Soda, of course, is just carbonated water. I could be wrong, but it seems that there’s cotton candy on the top of the drink to add a little more sugar. 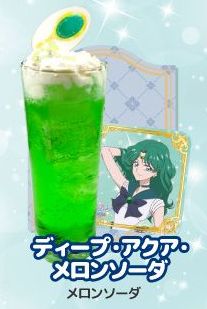 Another popular flavor in Japan, both in the form of shaved ice and in fountain drink machines at fast food restaurants, is melon-flavored soda. It is also often sold in a cream soda variety which gives it a bit more body, and you can see that there’s some cream at the top here as well. Theme-wise, I’d say it fits Sailor Neptune pretty well! 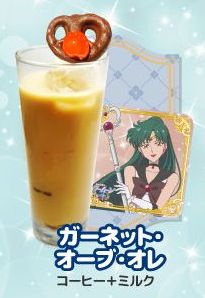 Finally, we have a traditional iced cafe au lait, consisting of coffee and milk, with a chocolate-covered pretzel at the top. I’m not absolutely certain what the red thing at the top is, but it’s probably some sort of candy. The color combination here fits Sailor Pluto pretty well, though I think they could have done a bit more thematically rather than a simple iced coffee… 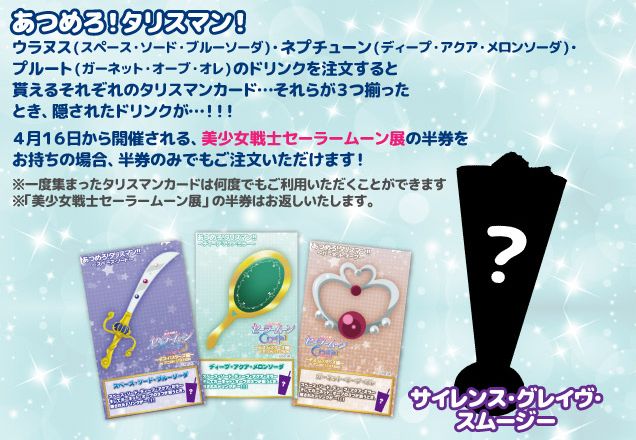 Most interesting with their Sailor Moon-themed drinks is how they implemented Sailor Saturn as the “hidden” drink. The only way that you can order the Sailor Saturn-inspired drink (a smoothie) is by “collecting” the three talismans of Sailor Uranus, Neptune, and Pluto, taking the cards you receive, and then showing them as a proof of purchase to allow you to order the drink. You can, alternatively, use the your ticket stub from the Sailor Moon Exhibition. The text reads:

Gather the Talismans!
After ordering the drinks for  Uranus (Space Sword Soda), Neptune (Deep Aqua Melon Soda), and Pluto (Garnet Orb au Lait), you can receive their respective talisman cards. After collecting all three, the hidden drink is unlocked!!

If you have a ticket stub from the Sailor Moon Exhibition, you can order it with that as well!

* After collecting the talisman cards, you may order the drink multiple times.
* We will return the “Sailor Moon Exhibition” ticket stub

Sounds like a pretty good deal to me! Can’t wait to see what the smoothie looks like.

If you choose the souvenir set, you can order any drink you want and also receive a limited-edition, Anion-only plastic folder. Not a bad deal, especially considering the design and that it includes the entire Sailor Team! 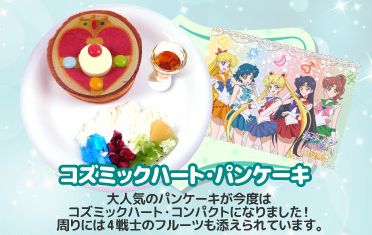 The incredibly popular pancake is now the Cosmic Heart Compact! It’s surrounded by fruits inspired by the other four Soldiers.

They’re referring to the compact pancake which came out last year, but it’s nice to see that they “powered” it up to match the new season while still bringing ti back. As for what the four fruits are, judging by the picture it seems that it’s pineapple for Sailor Venus, kiwi for Sailor Jupiter, raspberry (?) for Sailor Mars, and I’m really not sure about Sailor Mercury… 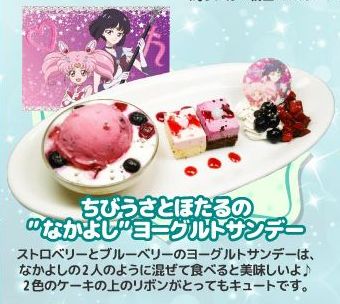 Just like with these two best of friends, the strawberry and blueberry yogurt sundaes taste great when mixed and eaten together! The ribbons on top of the two-toned cakes are really cute.

I can’t say that yogurt is one of the first things that comes to mind for me when I think about dessert, but between the cakes and the dollop of ice cream (gelato?), I’d say they may have pulled it off. The color scheme is also really nice! 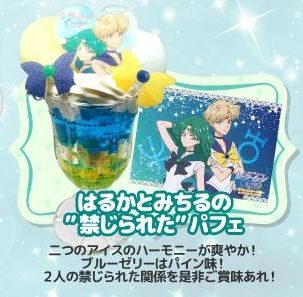 The harmony between the two ice creams is refreshing! The fruit gelatin is pineapple flavored! You’ll definitely want to taste these two’s forbidden relationship!

Looks like they’re not trying to play down the relationship between Haruka and Michiru at all any more, which is refreshing when compared with the original run of the Sailor Moon anime. That said, I’d really like to know what their ribbons are made out of. Just plastic, maybe?

As with the drinks, you can get a limited-edition clear plastic folder if you order a souvenir set, which includes any dessert of your choice. Personally, I’d say this one is just a little more impressive, but both are nice!

In addition to simply enjoying the food and the atmosphere, the Anion station staff will introduce you to different music and will also take requests from customers (even through Twitter!). Through the Juke Box Rock On system, you can request a song from the Pretty Soldier Sailor Moon song list along with a personal message through Twitter. Sounds fun!

Under the Time Travel heading, the staff will be playing songs from throughout the series, separated by generation (season, most likely).

At the end of each 90-minute segment (which is how long reservations are for), they will play the first episode of the Death Busters arc on a large screen. Of course, most fans will have already seen it by then, but it still makes for a nice perk and adds to the ambiance!

And there you have it, a run down of the Sailor Moon Crystal – Death Busters Arc cafe menu at Anion Station.

I’ll be updating this a bit later once I actually go there myself, but for anyone who doesn’t have an opportunity, I hope this was at least somewhat informative!