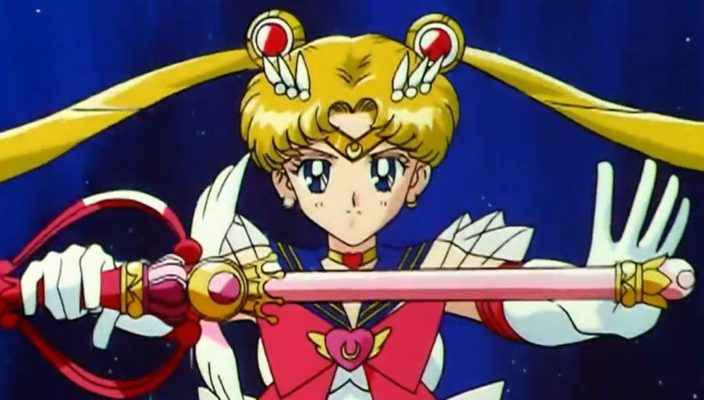 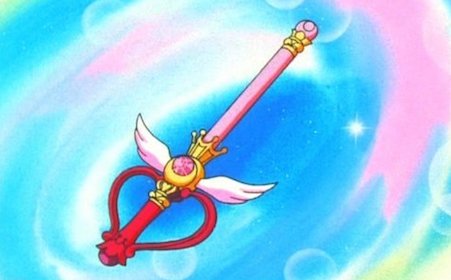 No matter what way you cut it, the Kaleidomoon Scope1 is just a weird item in the world of Sailor Moon. Not only does it not fit in with the other wands in terms of name or design, but the way she holds it always struck me as odd. If anything, she seems to wield it much less like a magical rod and more like a sword.

Thematically speaking, with the exception of the crescent moon on the hilt, the design seems less lunar-themed and more Pegasus-inspired with those wings coming off the side. It makes sense within the story when you consider that it was granted to Usagi by Pegasus, but you’d still think it’d be a bit more Moon-ly.2

So what’s going on with this magical item, and how does it fit in with the theme of the Sailor Moon SuperS/Dream story arc?

First off, let’s grapple with the question over what this thing actually is. Where does it get its name if it doesn’t even look like a kaleidoscope in the first place? 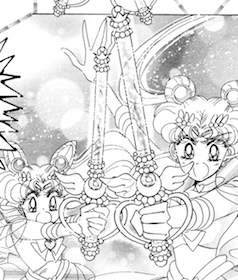 As many of you probably already know (and are yelling enthusiastically at your smartphone to tell me), things are a lot clearer in the manga because Pegasus actually turns kaleidoscopes — wheel kaleidoscopes,3 to be precise — that Mamoru bought for Usagi and ChibiUsa into their respective Moon Kaleidoscope and ChibiMoon Kaleidoscope.4

Read also:  Why Is There No Sailor Sun in the Sailor Moon Universe?

Unlike the anime, the bodies of the manga Kaleidoscopes appear to be translucent and shiny, implying that they could be wand kaleidoscopes — the types that are typically an acrylic cylinder, either filled with various materials or solid, that slides back and forth in front of the viewfinder.

What about the anime Kaleidomoon Scope then? That pink beast can’t possibly be inspired by a kaleidoscope, can it?

Well, in my fruitful pursuit of learning all about the many different types of kaleidoscopes out there, it turns out there’s one that could fit the bill, at least as a point of inspiration: the marble kaleidoscope, which works by having a marble at the end of a tube that, when rotated, presents the viewer with various colors and designs.

Not unlike, you know, the red gem at the end of the anime Kaleidomoon Scope. 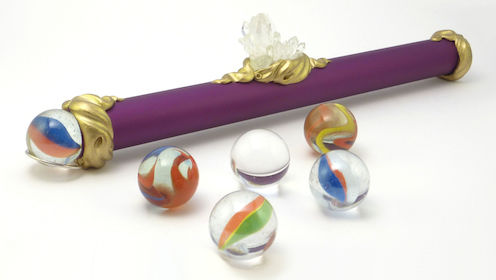 So with that all out of the way, I’d say that we pretty much covered every angle on how Super Sailor Moon‘s wand of choice could very well be a kaleidoscope. Or, if not, at the very least could be inspired by one.

But what about the question that started us down this rabbit hole in the first place? Regardless of whether or not Ms. Takeuchi and the anime staff were actually inspired by real world kaleidoscope designs when making the magical item, why did they choose that theme in the first place?

The concept of “mirrors” played a central role in the Dream arc, both as Dream Mirrors in the anime and the concept of the existence of a dark, parallel universe in the manga. Nehelenia also used mirrors to great effect in both the anime and manga, so it seems like the Dead Moon Circus at least got their theming done right. 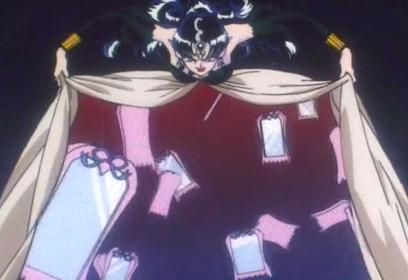 Nehelenia had an interesting relationship with mirrors

And not being one to ruin a good thing, Sailor Moon plays right into this mirror theme with her Kaleidomoon Scope. After all, a kaleidoscope is by definition:5

an optical instrument in which bits of glass, held loosely at the end of a rotating tube, are shown in continually changing symmetrical forms by reflection in two or more mirrors set at angles to each other

So when you look at it in that light, this weapon actually makes a lot of sense. It’s a magical item themed around an item that exists solely around the concept of using an array of mirrors to turn a static object into a dynamic, changing work of art.

A kaleidoscope uses mirrors to create beauty. In that respect, there’s really no better item that Usagi could use to fight off Nehelenia and her minions, in my opinion. 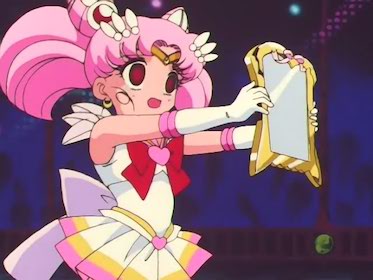 To be totally honest, I’ve never really been a fan of the Kaleidomoon Scope. The design just seemed so different from the rest, and the way she used it just didn’t seem to have that same Sailor Moon feel that the earlier story arcs established.

However, looking at it in this new light, I kind of like it a lot more now, or at least can appreciate how it juxtaposes with the Dead Moon Circus.

So what’s your take on all this? As far as I can tell, there’s never been any official word on why a kaleidoscope was used, so I’d love to hear any other ideas that might explain it away. Also, while you’re at it, let me know down below what your favorite wand is!

11 thoughts on “Why Does Sailor Moon Use a Kaleidoscope in the Dream Arc?”