What’s in a Name?

As anyone who’s started out on the massive undertaking of learning Japanese can probably tell you, there are three different writing systems used in Japanese: hiragana, katakana, and kanji. Hiragana and katakana are nearly identical except for their usage – hiragana is used for native Japanese words, while katakana is used for words of foreign origin or for sounding things out (such as onomatopoeia). Kanji is used in conjunction with hiragana1 to add context and meaning to words or names.

The reason why this is important is that Rei’s name not only lacks any kanji associated with it (to be fair, both Usagi and Makoto’s names are typically written only in hiragana as well), but it’s also written in katakana, the system usually reserved for foreign names. Considering that we can be pretty sure that Rei’s not foreign (especially when you consider that Grandfather Hino is about as Japanese as they come, running a Shinto shrine and all), that leads us to the interesting question of why Ms. Takeuchi would choose to write Rei’s name in this manner. So, why did she? 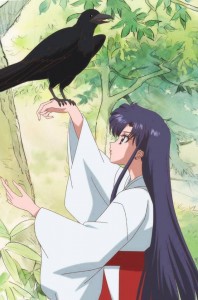 The Mysterious Miko and her Birds

While Ms. Takeuchi has never officially commented on this issue, it’s most likely that her reason for choosing this style is precisely to draw attention to Rei’s name. You see, since Japanese lacks uppercase letters and it doesn’t look so good in bold or italics, one Japanese strategy to emphasize a word or text is by writing it in katakana. For example, this strategy is often employed in video games or manga when robots are speaking. It gives the reader a sense of unease and draws attention to the text, the same way an English writer may put something IN ALL CAPS.

How does this all play out for Rei? Well, it gives the reader an impressing that something just isn’t quite right about this priestess girl and a sense of mystery to her. It also leaves it up to the reader as to which kanji they want to attribute to Rei, depending on what they believe her personality is. Though Usagi and Makoto are written in hiragana, there’s really only one meaning possible for either of their names: rabbit and truth, respectively. Rei, on the other hand, has several prime choices, all of which could be read the same. For example:

So by writing the name in katakana, Ms. Takeuchi is in a way able to attribute all of these meanings to Rei, all without actually saying any one in particular.

As one final note, it’s worth mentioning that the Chinese adaptation didn’t have the luxury of spelling out names phonetically and actually did have to choose one of the above. The localization there went for 火野麗 (the second one above),5 though it seems there are several other characters used occasionally by fans. Who knew that how you write the name could mean so much!

3 thoughts on “What Does Rei’s Name Mean?”