One of the first and most important things to mention when talking about Ami’s enormous IQ is that (in the manga, at least) it’s actually an unsubstantiated rumor that she has a 300 point IQ in the first place,1 spread by her classmates in Juban junior high school.

She got full marks on all subjects and is ranked number one in Japan.

She also scored first place in a national exam for all core academic subjects with a score of 900/900, which at least does prove that she is incredibly smart and that it isn’t all just schoolyard gossip, as if we needed any further justification. Now, in case you’re curious where this 900 figure comes from, Japanese junior high schools hold mid-term and final exams on the five core subjects (Japanese, Social Studies, Math, Science, English) and four practical skill subjects (Music, Art, Physical Education, Technology and Home Economics).2 Assuming that this was the base which was used for the national exam Ami supposedly took part in, that means she got a full 100 points in each of the nine subjects—including PE! Talk about impressive…

Ami downgraded to a lowly 500 points…

If you look at the re-mastered kanzenban (Complete Edition) manga, you can see that Ms. Takeuchi obviously picked up on this anomaly that Ami is a PE and Home-Ec master and downgraded the test to the five core subjects mentioned above.3 In both cases, however, the person speaking clearly remarks that she’s rumored to have an IQ of 300.

Now that we got that out of the way, what does an IQ score actually mean? We hear about it all the time, and it’s commonly used in television, movies, and other media to impress the audience with the intelligence of a character,4 but we rarely think about what this actually means and, sadly, how mundane the number actually can be. So, how do we calculate your IQ? Simple, really!5 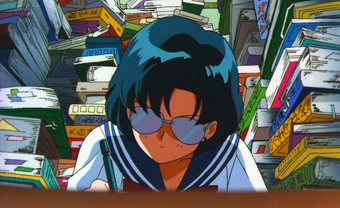 Studying hard to keep those grades up

Since we know Ami’s age (14) and her IQ is supposedly around 300, it’s relatively simple to do the math and see that a 300 IQ means simply that she has the problem-solving ability of an average 42 year old.9 Now don’t get me wrong, that’s pretty impressive in its own right, especially for a 14 year old. But on the other side of the coin, this should help at least ground things a little closer into reality and explain why, even if her 300 IQ were more than a rumor, she isn’t quite the phenomenon that the huge number implies.

However, in this old-fashioned and simplistic test (which, I should mention, has not been used for years but is generally the one referred to in pop culture) it’s not possible to obtain a score over 170, which takes us back to square one. Or does it? A similarly unrealistically high number has come up in the past, from none other than famed science fiction author and ex-Mensa member, Isaac Asimov. As the (unsubstantiated) story goes, he took an IQ test in the back of a book and got an IQ score of 135,10 but was dissatisfied with the fact that though the test penalized for being slow (less questions answered = a lower score), it didn’t reward you for being fast. Since he finished the test in half the time, he doubled his score to 270.

All work and no play…

Assuming the possibility that the people giving Ami the test were also using dubious means (which isn’t all that uncommon, as was the case with Marilyn vos Savant,11 whose own IQ score of 228 is highly disputed due to shaky math by the test-givers), and her score comes from having rushed through the test in record time and obtained an actual base score of 150, this would put Ami at a much more reasonable level of having the problem-solving capacity of a 21 year old, and also in line with scores seen among normal Mensa members.

So what does this all mean, in the end? Basically, the take home lesson is that Ami is absolutely a brilliant character (as she proves both scholastically and in helping her friends out of an untold number of dangers), but for all the talk it gets, her IQ should probably not be considered nearly as much as it is. More than likely, it’s purely a rumor, and even if it weren’t, Ami should be seen more as a role model for what you can do with study and hard work, and not just a number. Sailor Moon Says!12