Out of all of the Inner Sailor Soldiers, Makoto is definitely the one who has changed the most from her original inception and her final incarnation in the manga. Ami and Rei of course also differed from the original plans written up by Ms. Takeuchi (to say nothing of the differences between manga and anime Rei) – though the differences weren’t quite as dramatic as Makoto – while Minako stayed largely the same, thanks greatly in part to the fact that she starred in her own prequel manga running parallel to the Sailor Moon universe.

As we’ve discussed previously, the Makoto Kino that we know today was originally to be known as Mamoru Chino, a cigarette-smoking, rough-and-tumble junior high school girl. Naoko’s notes here read (clockwise, starting from the top):

So we can see here that Makoto was originally planned to be something of a juvenile delinquent though, in Ms. Takeuchi’s own words, apparently she had been reformed somewhat. Though, the question is: did Makoto really change all that much from Naoko’s original plan?

When we first meet Makoto in the manga,1 she’s introduced as the new transfer student to class 2-6 who wears a different school uniform due to “the sizes not fitting,” and according to Umino, was kicked out of her previous school for fighting.2 One of the first things that stands out is not so much that she’s wearing a different school uniform per se, but the style and how she’s wearing it. The long skirt Makoto wears is reminiscent of the sukeban fashion of the time, the mark of a female juvenile delinquent which was popular throughout the 1970s and 1980s. The most popular example of this at the time is probably from the manga Delinquent Girl Detective (スケバン刑事),3 a manga series which has been adapted into an OVA, live-action drama, and live-action movies. The word sukeban itself is an abbreviation of sukebanchou (女番長), which stands for “female gang leader.”

In addition to the other variations/accessories to the style,4 some of the main hallmarks of the sukeban was the long skirt, the rolled-up sleeves, and the lack of the bow or ribbon that typically accompanied the sailor schoolgirl uniform. All of these, as you may have noticed, are present in Makoto’s character design.

Last, but not least, for the evidence toward Makoto still retaining the wild streak Ms. Takeuchi had originally planned for her, is the scene in the manga where Motoki, possessed by a youma, tries to seduce Makoto.5 In the scene, we can see Makoto, alone, going to a vending machine late at night. 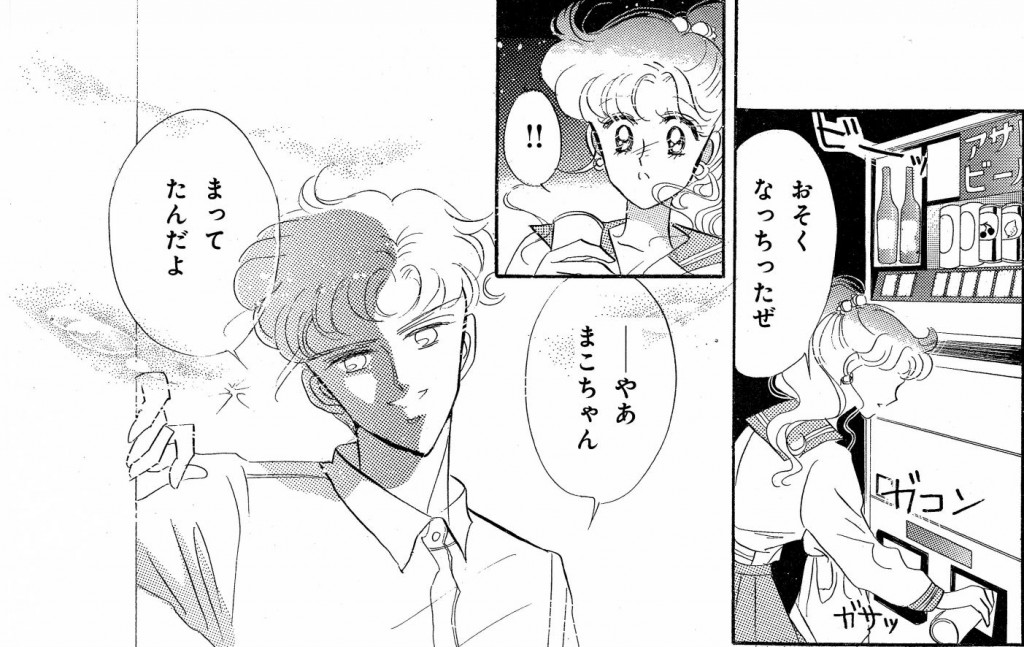 What’s noteworthy about this scene, however, is the sign at the top of the machine which reads “Asa__ Beer.”6 At the time (and even today), it wasn’t uncommon to find vending machines selling alcohol that anyone could purchase from without supervision or needing to prove your age,7 which it looks like Makoto is doing in this scene.

While Makoto may not be – as far as the storyline canon is concerned – a member of a gang, it’s pretty clear that Ms. Takeuchi’s original intentions for the character are that she has some strong anti-social tendencies and, even if not directly involved in gang-like behavior, definitely bears a strong resemblance to the anti-establishment movements at the time. It’s also pretty evident that, though I’m sure she was tamed down a little bit and became even more so as the series progressed, Ms. Takeuchi intended for her to still be something of a troubled and openly defiant young girl. I’d love to see more of her notes on this someday, but for now we have to just make do with what you can see in the manga!

10 thoughts on “Was Makoto a Member of a Gang?”