The Makaiju story arc, exclusive to the Sailor Moon R anime, has always been extremely divisive among fans of the series. Not only did it not even exist in the manga, but it also feels more like an extension of the first season rather than as if it’s telling a whole new story.

And that, my dear friends, is exactly why I love the Makaiju storyline so much. It takes everything I loved about the anime telling of the Dark Kingdom arc, compresses it into a few episodes, and throws it all together into a “slice of life” low-impact story.

Today we’re going to take a look at an interview with Yumi Toma,1 voice actress for Natsumi Ginga (or better known as her alien form, An), about how she viewed and portrayed her character. If you love this story arc as much as I do, I’m sure you’ll find this pretty interesting!

I hate to go totally off topic, but one of the reasons why I absolutely love Ail, An, and the Makaiju so much is that it was something of a saving grace for me, probably not unlike what many young Japanese fans felt after the original series ended with such a dark twist.

You see, the channel that first introduced me to Sailor Moon took the series off the air in the middle of its run, leaving me hanging right before the final battle against Queen Beryl. Being the late 90s, I was without streaming options or even reliable internet to figure out what happened next, so my only choice was to desperately attempt to track down video tapes at a rental chain.2 After calling a few places in the city — yes, using a real phone, calling numbers that I looked up in a phone book — I finally found a few tapes.

Fast forward3 to a few days later, and I was finally able to see (what I believed to be at the time) the end of Sailor Moon. It was an incredibly bittersweet feeling. While I was so happy to see the show get a resolution, it ended with such finality. That was it. No more Meatball Head, no more Molly from Brooklyn, no more Darien. My favorite characters’ stories were now told, and that was that.

Or so I thought.

Several months later I was at the mall to spend my birthday money when I ran across the “Doom Tree” box set. I truly can’t describe how much that meant to young Jason at the time, but I felt like the clouds had parted, like I was reunited with old friends. This meant I had 13 glorious episodes of brand new adventures.

And that, my dear readers, is why I love the Makaiju story arc so much. It opened up the door to new Sailor Moon adventures for me, and even introduced me to the fact that there were stories beyond that. The rest, as they say, is history.

Alas, that has nothing to do with what we’re talking about today! What we’re here to take a look at is an interview with voice actress Yumi Toma, published in the June 1993 issue of the Japanese anime magazine Newtype.4 In this interview, she gives some interested insight into how she sees the character of An/Natsumi and about her motivations. 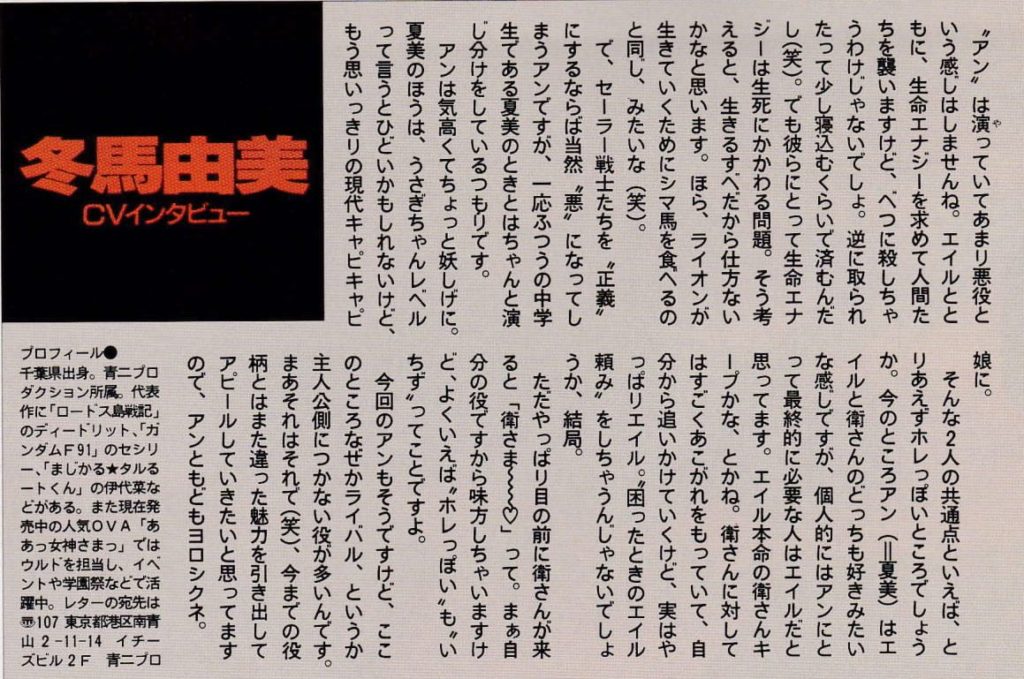 Playing the role of “An,” I don’t really see her as a villain. Sure, she and Ail may attack humans while seeking out life energy, but it’s not like they kill anyone. I mean, after their energy is stolen, the humans just get a little tired and sleep is all. (laugh) But to Ail and An, this life energy is a matter of life and death. If you look at it that way, I think it’s no big deal, since it’s something they have to do to live. I mean, hey, it’s just like a lion eating a zebra to survive. (laugh)

It’s funny — despite all the hundreds of articles I’ve written and hours I’ve spent obsessing over every little detail of Sailor Moon, I’ve never looked at it from this point of view. I actually think she’s got a good point! Compared to all the other villains, these two are easy to sympathize with!

If you were to take the Sailor Soldiers as “justice,” then that naturally makes An “evil.” However, I try to be sure to portray her time as Natsumi just like a normal junior high school student.

An is full of herself and devious, while Natsumi is — though maybe not quite as bad as Usagi — just a modern upbeat girl who lives to her fullest.

I guess the common attribute between the two is that they tend to fall head over heels in love. Right now, An (Natsumi) seems to be in love with both Ail and Mamoru, but I personally think that in the end it’s Ail that she really needs. Ail’s her true love, while Mamoru is her fallback… that kind of thing. She really admires Mamoru and chases after him, but in the end it’s Ail. When she’s in trouble, he’s the one she relies in on the end, right?

You probably don’t want to mess with An…

This is another interesting point for me, since I’ve always felt the whole An⇔Ail→Usagi→Mamoru←An⇔Ail love… triangle? Octagon? to be rather confusing. It’s obvious that they’re romantically involved and care for each other deeply, and yet they still pursue others. On the other hand, I appreciate the effort Ms. Toma went to in portraying An and Natsumi characters in different ways. It’s amazing just how much control a voice actor exerts over their character.

Yet still, when she sees Mamoru, she still falls right for him. I mean, since she’s my character it’s only natural that I’d be supportive of her, but I’d say she’s “quick to fall in love” and “earnest.”

For some reason, I’ve recently been taking on a lot of roles where, just like An, I play the rival against the main character. But that is what it is. (laugh) I want to try to pull out the best in characters, even those different from what I’m used to. I hope you’ll keep supporting An and my other characters too! 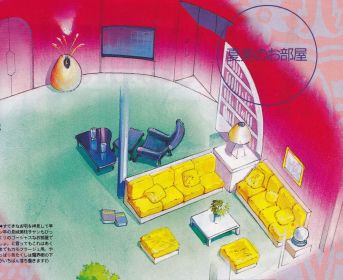 Personally, I found the additional insight into An’s character to be incredibly interesting. As I mentioned earlier, since the characters themselves are on shaky ground as it is in terms of their legitimacy in the series — especially after they basically were rewritten into Fiore and Xenian — it’s rare that you find any information about Ail, An, or the Makaiju.

And now for that burning question I have for you: what do you think of the Makaiju story arc? Just a rehash of the Dark Kingdom story that had already been done better elsewhere, or maybe a fun and low-key look at the series? Basically filler in the worst way? I’d like to get some insight on how people feel about this unique side story in the Sailor Moon world!

12 thoughts on “How Were Ail, An, and the Makaiju Seen as Sailor Moon Villains?”