Take a look at any lineup of the Sailor Soldiers and you’ll undoubtedly notice that, well… Setsuna – Sailor Pluto – tends to stand out just a bit from the other members of the Sailor Team. But just why is that?

One of the theories I’ve seen thrown around a lot is that Sailor Pluto isn’t Japanese, and that is why she differs in appearance from the rest of the cast. Well, today we’ll take a look at this question and more, and see what Ms. Takeuchi and the world of Sailor Moon can tell us about the Sailor Soldier of Time! 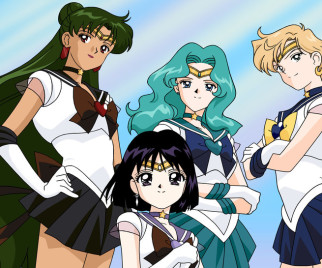 So is Sailor Pluto Japanese?

Of course not! She’s from Pluto! What’s more, she lived during the Silver Millennium, which existed hundreds – if not thousands – of years prior to the Japan we know today.1 But that’s not really what you’re asking, now is it?

How about Setsuna, then? Well, since we don’t really know anything about her life or family on Earth, I guess we’re open to interpret this however we wish. But I wouldn’t be so fast to assume that the color of her skin give us the proof we need to say that she’s not from Japan. After all, Japanese anime has typically not been subtle, shall we say, when a character is meant to be from a different country.2 She also has a Japanese name.

But the most important reason why this shouldn’t be significant is probably the fact that we’re talking about an anime where one of the main characters has pink hair, and nobody bats an eyelash.

While I find Sailor Moon to actually be fairly well-grounded in the real world, all things considered, we do have to accept that when it comes to character appearances, obviously some creative liberties were taken.

Now that we’ve gone way out of our way to explain why Setsuna is probably still supposed to be just as Japanese as our blonde-haired, blue-eyed moon bunny… is there any reason why she looks the way she does?

Fortunately, Ms. Takeuchi took it upon herself to answer that question for us in one of her many informative Punch! comic strips that appeared in the back of the remastered shinsouban editions of the manga.3

But don’t take my word for it. I think I’ll leave it up to Ms. Takeuchi to tell you. 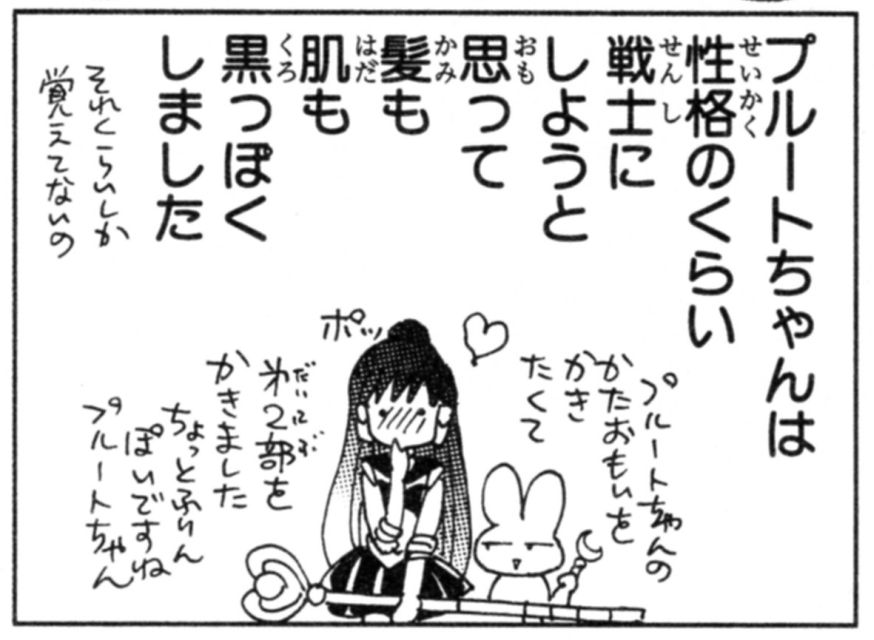 I wanted to make Pluto a dark Soldier, so I gave her hair and skin a black tone.
That’s about all I remember!

I wanted to write about her unrequited love, so I write about it in Part 2. Sounds a little bit like an affair there, huh Pluto?

So basically, Ms. Takeuchi figured that Sailor Pluto was something of a dark and mysterious character, and thus a dark skin tone and dark green hair would suit her.  Personally, I appreciate the diversity in character designs, so good on her!

But most interesting to me is the side note at the bottom, written by Ms. Takeuchi. Glad to know that even she agreed that Sailor Pluto’s feelings toward the married Endymion were kinda… interesting.

But while we’re here listening to Ms. Takeuchi’s stories about Sailor Pluto, let’s finish up with what she has to say! 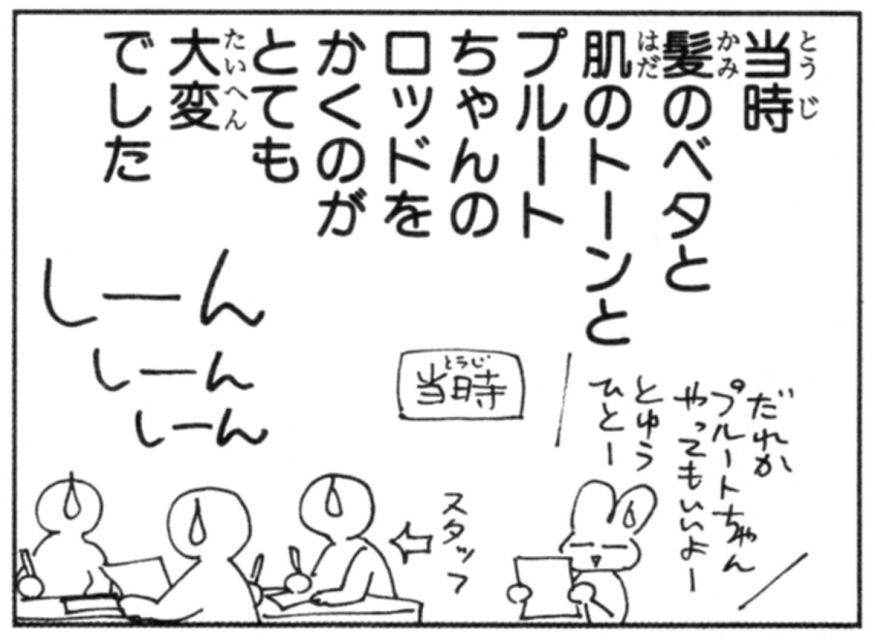 It was really tough to fill in her hair, add screentones to her skin, and draw her rod.
Naoko: So, whoever’d like to do Pluto, raise your hand!
Staff: Silence

For those of you who are like me and have no artistic sense, and thus no idea what screentones are, they’re a quick way of applying coloring or shading to a black-and-white drawing (often seen in manga) to save time.4

Just looking at pictures of the Time Rod makes my heart seize up, so I can only imagine how difficult it must have been to draw. Though it is interesting to see here one of the rare instances where Ms. Takeuchi discusses her having a staff that helped her draw Sailor Moon. It’s by no means uncommon, but it’s interesting to remember that the manga of Sailor Moon wasn’t done entirely at her hands. She probably did the initial line work and touch-ups, but the other details are often done by assistants.

So anyway! We’ve gone pretty far off course, but the summary of all this information is probably something like this: Sailor Pluto is intended to be no different than any of the other characters “in universe” – seeing, again, how the Sailor Soldiers live in a world where pink and blue hair are totally normal – but her darker skin tone and hair is supposed to be indicative of her darker personality. Considering how manga is a very visual medium, this is all pretty understandable!

Honestly, I’ve always loved Sailor Pluto as a character, but was always sad to see that she really never got any proper characterization in the anime or the manga.

Since we don’t have much in the way of canon answers to talk about Sailor Pluto / Setsuna’s life, I’d love to hear your theories!

18 thoughts on “Why Does Sailor Pluto Look Different From the Rest?”