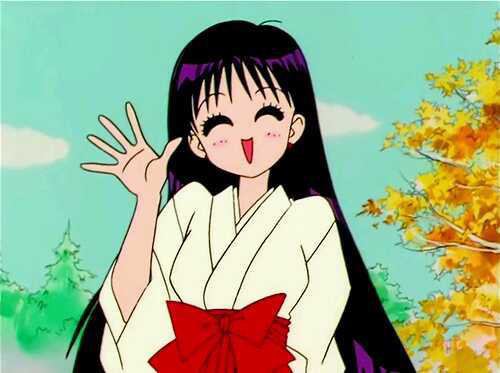 The answer to this question can be really short or surprisingly quite long, depending on how deep you want to get into it. Of course, the quick and easy answer is that “Rei is a miko because she lives at a Shinto shrine,” but like most things in the Sailor Moon universe, things aren’t that simple (nor would it be interesting if they were!). We’ve already discussed the interesting religious (in)significance of Rei attending a Catholic school, so let’s take a closer look at the inspirations behind her more obvious religious affiliations!

Fortunately for us, Ms. Takeuchi directly addresses this question in her ~~ Punch! question and answer segment added to the end of the re-released manga volumes around 2003/2004 (the shinsouban; “new editions”).1 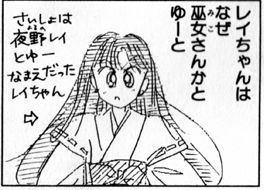 → Originally, Rei was going to be named Rei Yoruno (‘Rei of the Night’)

One of the things that I find fascinating about this story here is not only the background of how Rei came to get her religious affiliation, but I really do like her original last name. Though obviously the fire affinity fits in better with the Mars/Fire connection in Japanese, I think the original name and its connection with the night ties in neatly with the word play on ghosts/beauty in Rei’s name.

So what does Ms. Takeuchi have to say on the subject? 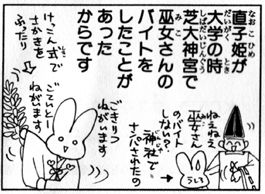 … it’s actually because I had worked part time as a miko at Shibadaijingu when I was a university student.

I waved evergreen branches at weddings… things like that.
Bow your head and pray! Stand up and pray!

Priest: Hey there, how’dya like to be a miko?
Naoko: I got hit on at a shine!

It turns out the inspiration behind Rei being a miko is actually tied to Ms. Takeuchi’s first-hand experience as one herself, during her college days. So it’s a pretty open and shut case, right?

Well, of course it isn’t. On the surface it sounds totally logical, but when you remember what we said at the very beginning – that Rei is a miko because she lives at a Shinto shrine – that doesn’t quite fit with what we know about Ms. Takeuchi’s background.2 Isn’t this some sort of holy position that takes years of study and religious devotion? How could Ms. Takeuchi have been a part-time Shinto priestess? This is where things actually get interesting.

I’ve actually known about this for several years now, due to a story one of my female friends told me about her days as a part-time miko over the New Year holidays. However, I never had a chance to research it until today. Now, this isn’t to say that all miko are just university students out for cash – that’s an over-simplification – but the majority attending weddings and over the busy seasons are, let’s say, seasonal workers.

So what does it take to be a part-time priestess? What are the perks? How about the downsides? Well, fortunately for us, there are websites devoted to miko-hopefuls that should answer some of our questions.3

What’s Involved in Being a (Part-Time) Miko?

The answers will differ for every shrine, but taking a look at the application page for Kandamyoujin,4 we can see it’s generally in line with what you expect to see when visiting a shrine: 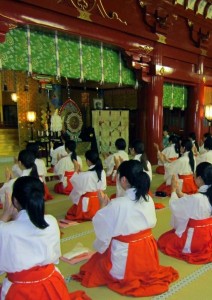 Taking all these things together, basically the goal is to retain the image of purity – a key tenet of Shinto.5

The last all-important-question that I’m sure everyone is dying to know about (or, at least, I was) is: just much much can one expect to earn from being a part-time shrine priestess over the holidays or for weddings?

Unfortunately, the shrines are pretty tight-lipped on this themselves since they don’t really want to make it look like simply a normal job, but the internet does provide us with some numbers:6

Well, this veered off on quite a bit of a tangent from what we set out to learn today, but I think it all wound up being pretty interesting! Though Rei’s situation is a little different, since she is a full-time shrine priestess (in addition to being a sailor-suited warrior fighting for love and justice and junior high student!), it’s nice to know that Ms. Takeuchi actually did put a bit of herself into Rei!

7 thoughts on “How Did Naoko’s Part-Time Job Influence the Creation of Rei?”