Anyone who has been around the internet long enough to have been bombarded with clickbait headlines on Twitter, Facebook, and even major new sides on a daily basis is probably familiar with so-called Betteridge’s law of headlines,1 which states:

Any headline that ends in a question mark can be answered by the word no.

Fortunately (or unfortunately) for me, here we address nothing but questions with answers that are rarely – if ever – as simple as a yes or no answer. On one hand, it’d be nice to quickly confirm or dismiss some of these questions, but that’d kill much of the entertainment and learning value for you, the reader, and the excitement and research value for me, the writer. I guess what I’m trying to say here is that, as usual, the answer to this question is: “it’s complicated.”

Within the Azabu Juban Shotengai (麻布十番商店街; Azabu Juban Shopping District),2 right around the time that Ms. Takeuchi was putting together the world of Codename: Sailor V (and later Sailor Moon), there actually was an entertainment center called “Crown.”

The small caveat here is that though the Crown was a game center (i.e., an arcade as we’d know it in the west) in the manga run by a friendly university student, it was actually an incredibly noisy pachinko gambling den that kids were forbidden from entering in real life, known as Pachinko Crown. The business has since shut down and has been converted into a McDonalds, but the design of the building is still noticeable to Sailor Moon fans.

Unfortunately, it seems that the anime didn’t take much of an effort to use the design of the original Crown, but it is nice to see that it was at least something of a festive landmark in the Azabu Juban area. According to a notice posted on the door (which was thankfully preserved online),3 Pachinko Crown closed for business on January 4, 2001.

While on the topic of the Crown shops (which, according to the Sailor Moon lore, was run by Motoki’s family, which explains why both he and his sister worked there despite being students), there is one more interesting thing to share: it seems that the Crown Fruit Parlor was also a real place, though it’s unclear if the businesses were related in real life like they were in the manga/anime. They both are named “Crown,” though, so it’s not too hard to imagine that there may have been a connection in the real world too. 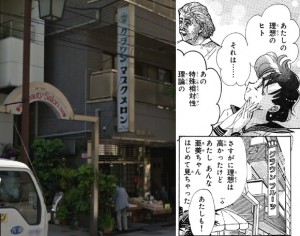 The shop with the Crown Musk Melon sign is actually a fruit shop (which doesn’t seem to have an attached cafe) named Marumiya that appears to still be in business.4

So there you have it! For what seemed like a couple of random shops that appeared throughout the Sailor Moon anime and manga (and, in the case of the anime and Central Control, was actually an integral part of the series!), it turns out that there actually was some truth behind the locations and their designs. I’d love to know more about what drew Ms. Takeuchi to these places, if perhaps she used to buy groceries at the fruit shop or used to commute along these roads, but I suppose that sort of history is for now at least lost to time. All the same, though, it’s a great feeling to be able to see my favorite places in the anime actually appear in real life!

2 thoughts on “Was There an Actual Crown Game Center?”