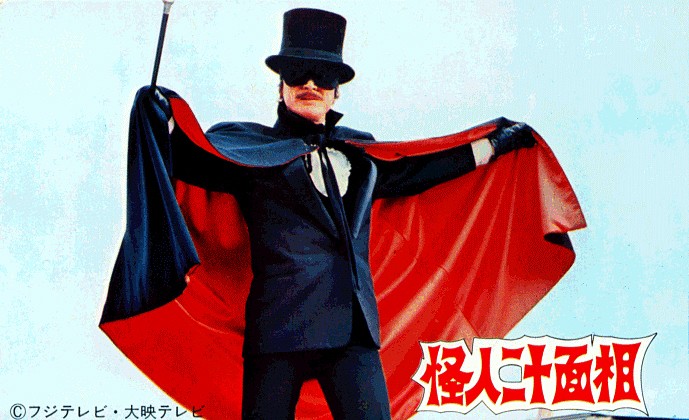 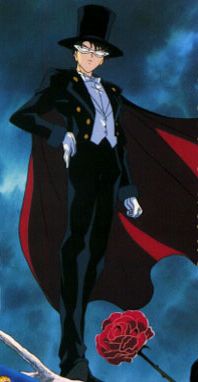 The first and most direct connection is to the character known as the Fiend With Twenty Faces,1 who has appeared in multiple radio dramas, movies, live-action television dramas, anime, manga, and even games in addition to the books he made his original debut in. Image-wise, the most obvious connection with Tuxedo Mask is the 1977 television drama starring Katsumasa Uchida in the titular role as the Fiend himself.2 From the top-hat to the cane and all the way down to the black cape with red fabric on the inside, the design is a dead ringer for Tuxedo Mask. This character and story are based off of the book of the same name written under the pen name of Edogawa Ranpo3 in 1936.

Story-wise, the connection doesn’t end there. After Usagi first meets Tuxedo Mask, defeats Morga, and saves Naru, she comments aloud that “He’s just like Lupin the Thief…” as he jumps away.4 This “Lupin the Thief” (怪盗のルパン; kaitou no rupan) she’s referring to, of course, is the famous Japanese manga-turned-anime character, Lupin the Third,5 probably most well known from the work done by Director Hayao Miyazaki’s debut work on a feature-length animated movie, The Castle of Cagliostro.6 This also gives us something of an idea of where Ms. Takeuchi may of originally intended to go with the character of Tuxedo Mask – that of a mysterious thief trying to steal the steal various gems that might be the Silver Crystal – as opposed to the direction that the anime went with where his intentions may be mysterious, but he’s pretty clearly there to help Sailor Moon out of a bind. 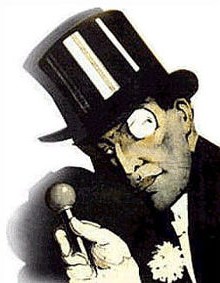 Now Lupin III himself has a pretty deep and varied history in his own right which, for the sake of brevity,7 I’ll have to leave you to read up on your own. However, another thing that’s interesting about him is that the inspiration for his character was… well, let’s say borrowed from the character created by French author Maurice Leblanc8 named Arsène Lupin,9 supposedly the grandfather of the Japanese manga character Lupin III.

Read also:  How Uncommon Are the Names of the Sailor Moon Characters?

In a manner very-much befitting a fictional story about thieves, it turns out that the author of the Lupin III manga, Monkey Punch,10 wasn’t the first one to steal the character of Arsène Lupin. In fact, he first entered Japanese popular culture in The Golden Mask (黄金仮面; Ougon Kamen),11 a novel by Edogawa Ranpo published in 1930.

That name should sound familiar, seeing as he’s the very same author who had created the character “The Fiend With Twenty Faces.” He actually used multiple characters from the stories by Maurice Leblanc when creating his mystery novels, though the Fiend … Faces himself seems to be a Ranpo original. Before you start feeling too bad for Mr. Leblanc and him having his characters “borrowed” wholesale without permission, it’s worth noting that he himself had “borrowed” the character of Sherlock Holmes until Conan Doyle filed legal objections.12 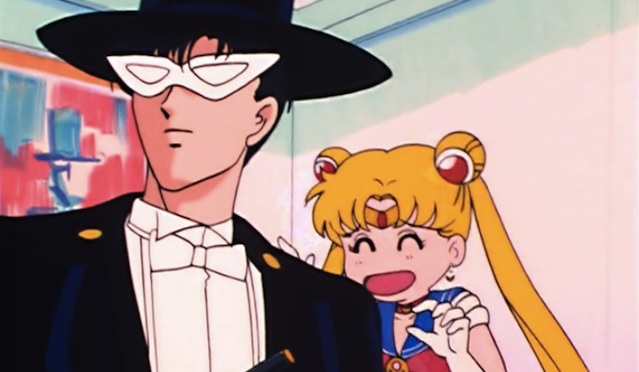 My work here is done…!

So where does that leave us in this convoluted story? Well, it looks like the most obvious connection for the inspiration behind Tuxedo Mask’s character would be Lupin III, but from what we’ve learned from analyzing Ms. Takeuchi’s work, the most obvious answer isn’t always the correct one. What we ultimately end up with is that the design for Tuxedo Mask is  inspired heavily by a character – The Fiend With Twenty Faces – invented by Edogawa Ranpo while his character traits seem to be inspired by the gentleman thief, Arsène Lupin, who was created by the French author Maurice Leblanc and popularized in Japan by Mr. Ranpo.

Just as one final interesting note, the inspiration for the name of Conan Edogawa13 of Detective Boy Conan / Case Closed fame comes from a cross between Conan Doyle and Edogawa Ranpo (which is itself a pen name that is a word-play on the name Edgar Allen Poe).

It’s good to know that, as usual, Ms. Takeuchi doesn’t disappoint in her interesting research and deep references behind characters and their personalities!

10 thoughts on “Who Was the Original Tuxedo Mask?”