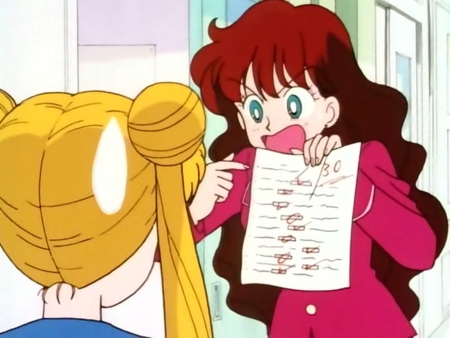 This Might Not Be As Bad As It Looks

Or, an alternative title for this question could be: “Is Usagi Really Just a Victim of Circumstances?” What I love most about answering these questions is having the opportunity to stop and take a look at the accepted facts of the Sailor Moon universe, break them down, and analyze them with respect to how they fit into the real world. When it comes down to the core elements of Usagi’s personality – the titular character in Pretty Soldier Sailor Moon – her supposed lack of intelligence is one of her defining attributes. I know I’ve talked a lot about intelligence already, but I think Usagi deserves a second look… and maybe even an apology. 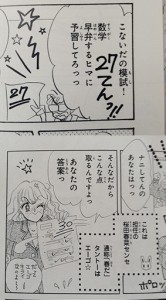 So, what do I mean when I say that Usagi may be smarter than we give her credit for? If you look at her scores in the opening of the series – a dismal 30 points in both the first act of the manga and episode of the anime – and take into account her comments about how angry her mother will be, it’s quite apparent that she’s not doing well in school. But when you take a look at many of Usagi’s peers (Ami, Umino, and Urawa for example), you realize that she’s actually surrounded by massively intelligent people.

In a 2007 study of academic abilities for students of 50 elementary and junior high school districts in the Tokyo metropolitan area,1 Minato ward (where Sailor Moon takes place) ranks 14th place. Back in the 1990s, Japan (and still today in Tokyo and other parts) was very strict about students not attending public schools outside the district they live in. Even still, all students are required to take tests and essentially compete to get into more difficult schools within the same district – competition which is pretty severe and which students (and their parents) start preparing for up to a year or more before graduation. In fact, most cram schools focus their “junior high test prep” classes toward fourth grade students.2 But what does this all mean?

Taken in aggregate, this means that Usagi lives in a school district averaging higher in rankings (and thus difficulty). We also know that the students who attend that school needed to compete to get in. It’s hard to believe that Ami and Umino would both have settled for low-ranked schools, especially when you consider Ami’s competitive streak (as shown in the episode where Urawa shows up and how badly she takes not having the highest scores). In order for Usagi, Umino, and Ami to all end up in the same school, Usagi must have had respectable elementary school scores and done decently on the entrance exam.

“But wait,” I can hear you say. “Look at her scores! You can’t deny she’s a poor student!”

And you’re right. I can’t (and don’t) deny that she’s a bad student. But Usagi’s scores need to be taken in context. First off, granting that Ami is brilliant, that presumes that the tests are actually difficult. After all, getting first place on an easy test doesn’t mean anything. Mamoru himself is also incredibly intelligent, so his critiquing her scores should be taken with a grain of salt. Compared to the elite school he goes to (which even Ami talked highly of), it’s no surprise he’d make fun of her low scores.

Second, we need to take into account that no scale is provided with their scores. I know it may seem obvious, but all of the instances where we see Usagi’s scores, these are always point totals and not percentages. The natural assumption is that these are out of 100, but it’s not uncommon for schools to modify these point totals to be a maximum of 80 (or even 60) depending on how important they believe the subject is, and thus how much it affects your total grade. This doesn’t change too much, but a 32/60 is definitely different from a 32/100.

Finally, it’s important to know that until 2002, Japanese schools used a relative ranking system (grading on a curve) for grading students that had nothing to do with your raw scores, and everything to do with the raw scores of your peers. Students were given a score of 5 (the best) through 1, depending on how they did relative to the rest of the student body. The scoring was as follows:3

Studying the Inside of Her Eyelids

This means that in addition to Usagi being in an objectively more difficult school, by virtue of being surrounded by intelligent classmates, her relative scores (and report card) are pushed even lower… simply by not being exactly as smart as the others.

Since Usagi’s intelligence is the butt of a lot of jokes throughout the series it would be going way too far to argue that she’s actually brilliant, but it is worth noting that a lot of Usagi’s poor performance can actually be blamed on her possibly just being in a school that was slightly out of her league. When you consider that she ends up in the same high school as the rest of the team in the Sailor Stars arc, this would show that she might actually be smarter than we were led to believe!

13 thoughts on “Is Usagi Much Smarter Than the Series Implies?”